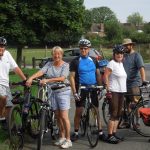 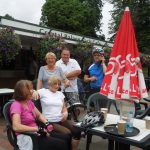 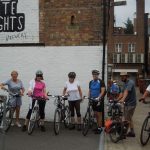 Next week-end ride leaders are unavailable and so we moved our last Sunday ride to the penultimate Sunday.

For this reason we didn’t really expect a strong attendance for today’s ride. But Bromley folk can, and often do, surprise us. There were 7 riders and a passenger this morning.

John led today’s ride, the initial plan was to visit Beckenham Place Park and have a coffee and then ride back; we set off at steady pace.

There were plenty of cyclists in Norman Park this morning, and it was very tempting to stop and speak to them and invite them on our ride, I am sure that many of them would have been really pleased to come out with us on a structured ride. I think this reinforces our thoughts of the need for us to do some advertising at the park in addition to our presence on social media. Our problem is really that we cannot deliver rides every week-end because we just do not have enough ride leaders.

Emerging at the roundabout into Hayes Lane we had a short wait for a gap in the traffic. On my way home I realised that Hayes Lane is closed to traffic at Bromley Common for ‘Essential Gas-works.’ This may explain why it was easier to leave the park than it was to get back in when we returned via the same roundabout a couple of hours later, when we had to wait for a lengthy line of cars to pass before we could get across. Even then we had to force our way through. This is fine for experienced cyclists but not for the novice taking the first tentative steps out of the park and onto the roads. I have said before, and at the risk of being boring I repeat, if Norman Park is to succeed as a cycling hub this roundabout should be removed and replaced with traffic lights.

We reached Beckenham Place Park about ½ hour later and realised that we still needed a bit more cycling, so we decided to press on to the Café in Crystal Palace Park and here we stopped for some tea/coffee and a natter.

All the while the sky had been darkening and as we finished our drinks and prepared to set off on our return journey we could feel the first mist of rain in the air.

I had recently learned of the existence of a micro-brewery in Penge so we did a bit of exploring and sure enough located Late Knights Brewery tucked away behind Superdrug in the High Street. There was no sign of any brewing going on so after a quick photo call we pressed on into rain which was becoming heavier.

We dropped off a couple of riders on route and got back to the start point at about 12:20. By now it was raining hard so we were pleased to call out our good-byes and shoot off to our homes.

And the non-rider mentioned in the first paragraph was Rowen who was travelling on his Dads bike in the child seat. Rowen is going to start school in September so best of luck Rowen.