Pix at bottom the page.

Twenty riders gathered at Bromley South for today’s ride. Some were regulars, some were occasional supporters, there were a couple of recent joiners and one newbie so a really great mix. I watched the group swell from the little café opposite the station where I was enjoying a second breakfast and a strong coffee so I could see they were all chatting to each other and that I had a happy bunch for the ride. Unfortunately there was a minor mishap as two riders joined us meaning they had to abandon the start whilst they made their way home to fetch another bike. Fortunately they were able to rejoin later when we reached Woolwich. So we actually departed as 18 riders; a goodly number!

Before we started I took the opportunity to promote the LCC and what it does for cycling in our borough and how we were just one of 32 local groups – 1 per borough throughout Greater London.

And then we were off. The skies were bright and there was an occasional glimpse of the sun but generally it was a still, calm, flat, sort of day – perfect for cycling really.

We made our way out of Bromley on what are supposed to be the quieter roads, but some of them didn’t seem very quiet today. The route took us through Chinbrook, New Eltham, Avery Hill, Falconwood, Welling, Abbey Wood and Thamesmead. The pace was relaxed, the only really steep gradient was down to Lesnes Abbey which we all took carefully so as not to miss the turning into the park to join the high level cycle path through the Thamesmead Estate.

Thamesmead does not enjoy a very savoury reputation (there is a very interesting 1970s documentary at this link about Thamesmead) but something the planners did do well was the cycle paths. We definitely enjoyed this segregated section of our ride. The works which have recently closed part of the route here appears to have been completed – anyway the path had been reopened since our last visit which made the route through even more convenient.

We have used the Link Community Centre on our rides before, unfortunately on this occasion there was only time for a quick comfort stop before we pressed on towards the ferry where we were hoping to rendezvous with that legendary Bromley Cyclist – Steve Watkin !

I had never heard of, or noticed, a landmark called the Woolwich Tump before, but as we continued along the Thames Path one of our riders – from the other side of the river will you believe, pointed out this conical mound hidden behind some blocks of flats. Stairs had been cut into the side and there was a spiral path encircling the dome. The tump is apparently an obsolete ammunition magazine which has been preserved and turned into some sort of visitor attraction. Once again because of time constraints it was not possible to stop and inspect this strange man-made hillock but you can be sure it won’t be long before we arrange a ride to have a closer look at this alien presence in our midst.

We reached the ferry terminal at about 12.30 were Steve was waiting for us as were Julie and Graham who had been home, collected a spare bike and managed to catch us up. As we did last time we cycled straight to the head of the long queue of waiting cars which were immediately held back so that we could cycle straight onto the ferry and into the pole position ready to disembark on the far side. The ferry was soon loaded and we were under weigh. The crossing was quick and we had the opportunity to put money into the buckets brandished by two women collecting for the McMillan Cancer Charity. On the far side we were more or less first off the boat and, managing to evade passport control, we headed for the Greenway.

The Greenway is in fact one of the major North London sewers and there was little chance of anyone mistaking it for anything else today as it was particularly malodourous. We rattled along as quickly as possible until we reached a point where the path had been closed for works and we were directed onto a quite complicated but very well signposted diversion which eventually brought us to Stratford and the Olympic Park.

We were a little later than intended and so did not have the opportunity to look around as much as we might have liked. It seemed very spacious and getting around it by bike seems to be a pretty good option. We agreed we would regroup for the return ride after an hour and set about finding somewhere to eat. There seemed to be plenty of options and I thought the prices were very reasonable.

Three riders had to depart from here so when we restarted we were back to 18. We retraced our route to the Greenway and then headed south on a terrible road towards the cable car. This part of my route really isn’t very satisfactory and before I try this ride again I am going to go and do some exploring because there has to be a more cycling friendly alternative – it’s just a matter of finding it.

For several riders this was their maiden trip on the Emirates Airline so there was quite some excitement. In the past we have been loaded 2 per car, but today they were loading us in threes. It was a bit of a squeeze. The crossing is quite fun and does allow some spectacular views over south London towards the North Downs which we could pick out on the hazy horizon. Much nearer was the Crystal Palace mast which seemed in almost touching distance.

Touching down on God’s side of the river we mounted up for the ride to Bromley. On this section of the ride riders dropped off as we passed their routes home so when I got to Bromley South we just 4 riders.

Today Gary acted as my lantern rouge and I am very grateful to Gary for keeping all together at the back. I had great bunch of riders today, it was a real pleasure to be cycling with you and I do hope you will come on another ride soon. 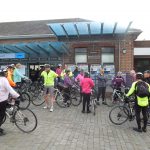 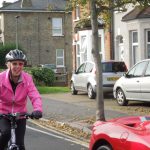 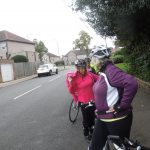 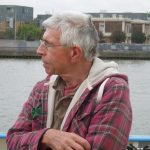 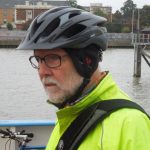 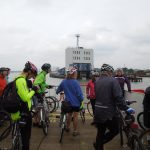 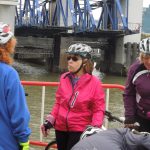 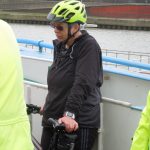 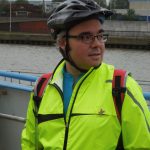 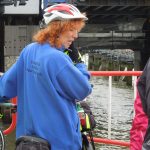 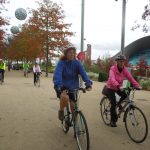 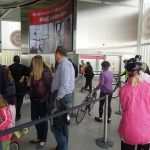 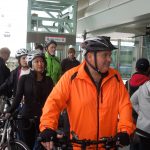 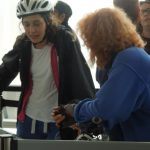 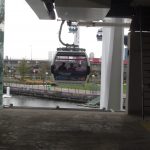 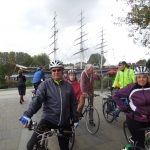