If anyone has a suggestion of something better to do than cycling yesterday I should be pleased to hear about it; and furthermore in the unlikely event that I happen to agree it might even be worth a prize.

With the sun blazing in a wall to wall azure sky at 8.30am I set of from home earlier than necessary to get the full benefit of as much of the day as I possibly could. One has to keep in mind that this could well have been the last day of the English summer; and looking at the weather as I write this I am discouraged to think I may be right. 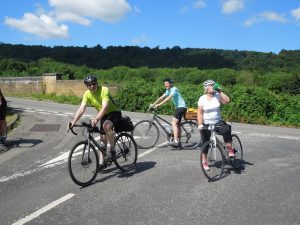 As Tracey and Linda were leading today it seemed an excellent opportunity to put some miles on my road bike which is something I don’t do often enough. The other thing I need to pay a little more attention to is cleaning it. But that’s a story for another day.

There is a little café opposite Bromley South called the Bromley Café which does all day breakfasts and the like. Two scrambled eggs on two toast and a rather strange tasting tea later I wandered over to the station forecourt and was joined by Linda. A short while later we set off for Orpington where we found Richard, Alison and Tracey, and so as a five-some we got going. Through St Mary’s Cray we accessed Chelsfield Lane and toiled under the sun up the long climb to Chelsfield where joining Maypole Road we did some more climbing to pass the paintball centre where they seemed to be going great guns (please pardon the pun) judging by the racket we could hear coming from within.

At Castle Farm Road we turned south to approach Shoreham from the north, we normally approach from the south so this felt a bit unusual. Shoreham was quiet and pretty, bathed in mid-morning sunshine. We wanted a loo stop here but Shoreham was closed; we continued southwards.

Through Otford we negotiated the horrible uphill right turn onto the Pilgrim’s Way keeping Otford Station on our right. Pilgrim’s Way is a rat run used by motor traffic avoiding the awful A25 a mile or so further south. Traffic is aggressive and generally unforgiving. The narrow road undulates with steep little peaks and troughs causing cycling speeds to vary widely: most irritating for motor drivers. But the reality is that apart from those accessing their homes there is no reason most of this traffic should be on this road at all. Sevenoaks Council is the local authority and would do well to look at some traffic management here. 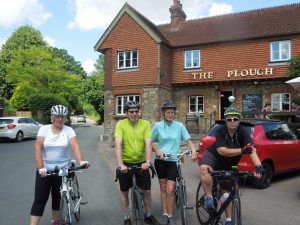 We stopped at the Plough at Ivy Hatch for a coffee and enjoyed some beautiful chocolate brownies that Alison had prepared. Absolutely delicious. Two each, except for one greedy rider who will remain nameless – three. We sat in the warmth discussing the route so far and life generally. Caren Hartley’s bikes are a hot topic at the moment. We met Caren on the FreeCycle event last weekend, she had a display stand in Leadenhall Market and we were mesmerised by the beauty of Caren’s hand built bikes

The stop at the Plough was probably twenty minutes longer than it should have been so we had all stiffened up by the time we remounted and pushed on. We were now on the flatter section of the route, and glad of the respite from the rolling geography of the first 20 miles. Progress was quicker now. We passed The Kentish Rifleman at Dunks Green where I thought the once pretty  and well kept green was beginning to look quite scruffy and unkempt.

At Hadlow I once again failed to get a picture of the rather interesting folly which appears on the horizon from about two miles away, when I think to myself ‘when I get a bit closer I’ll get a picture of that’ and then when you next see it you are too close, happens every time I come this way. You would think I might have learnt by now.

And so to the end of our ride. At Yalding we crossed the River Medway without stopping. This is a very attractive location where a narrow historic bridge crosses the locks by the Anchor Pub on one side and Teapot Island on the other.

At Paddock Wood we sat in the Waitrose Car Park and were treated to an ice-cream by ride leader Tracey and then made our way to the Station for 1502 train homewards.

This was a lovely ride, it will probably benefit from a few tweaks but I am sure in the future we will be publishing this as a led ride for Bromley Cyclists.

Thanks to Tracey for leading, to Linda for providing the route and I believe also to Bob G who designed the ride originally.