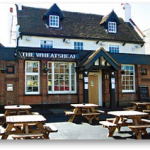 The Wednesday Wander on 11 February visited the Wheatsheaf in West Wickham where we we were well received as detailed in the earlier report here.

So well done to the manager and staff at the Wheatsheaf.

By winning the pub of the month this puts the Wheatsheaf in the running to be declared  Bromley Cyclists Pub of the year and receiving the Golden Bike award. This will be declared in January 2016.

Keep up the good work. We will be back soon.