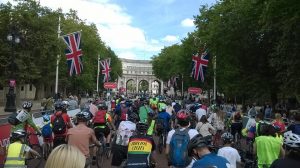 97 riders left Bromley South this morning, ably led by our ride leader today, Spencer.   With fine weather  we set off up the hill and were soon crossing the lights at Shortlands Station heading for Beckenham Place Park and some traffic free riding for a while.

We had a great group of marshalls today and we crossed the junctions with relative ease so thanks must go to them, together with ‘the boys’ who were always on hand to assist at the junctions and help to keep our group safe.

The ride up was relatively smooth given the number of people, which had by now risen to 106, as we had picked up a few on the way. From Beckenham Place Park we headed towards Moremead Road to pick up the Waterlink Way, again a nice stretch of traffic free riding.   Reasonably quiet at this time of the morning we made good progress. 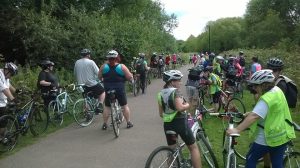 Once off the Waterlink Way we made our way through Burgess Park, crossed the Old Kent Road and before we knew it we were on Southwark Bridge.  Two and a quarter hours, which given the number of riders was not bad at all.  Soon after we arrived we saw another large group from Lewisham arrive, led by Jane.   Just a short way now to join the ‘Ride’.  We sent everyone on their way and stopped for a coffee before we too joined the thousands of other cyclists.

It was lovely to ride around the familiar sights such as Trafalgar Square, Admiralty Arch and The Mall without any traffic, but as usual it was extremely busy and with the many pedestrians crossing the roads at regular intervals, this made our journey rather slow at times. We sat in Green Park eating our lunch and chatting with some of the many other groups who were there.

A most enjoyable day and lovely to see so many people out on their bicycles. All sorts were there, penny farthings, men on stilts riding rather large bikes, recumbents, tandems, balance bikes, the lot. 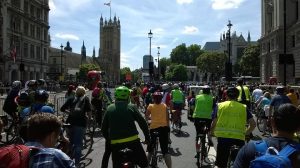 Before we knew it we were assembling once again on Southwark Bridge for the ride home. Some had made their way home independently and some had taken to the train so we only had 55 for the return ride.

The ride home was a little quicker, apart from a stop for a puncture on the Waterlink Way and we arrived back in Bromley around 5.30pm. Thank you to everyone who rode with us and a particular thank you to all the marshals.