An excellent turn out, despite a rather wet Friday evening, for the Ride Safe, Ride Bright ride from Beckenham. 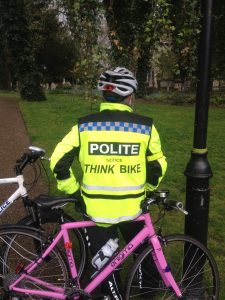 Prior to departure Nev was there from BCR Bikes, Orpington as Dr. Bike, to ensure everyone had roadworthy bikes before the ride and the Road Safety Team from Bromley who were on hand to do any security marking necessary.

Everyone had dressed brightly, some in high viz clothing, some in tutus, lots of lights on their bikes and helmets as they set off at 7pm from St. Georges Green.  The aim of the ride being to raise awareness of the importance of being seen on your bike and promoting safety on the roads. 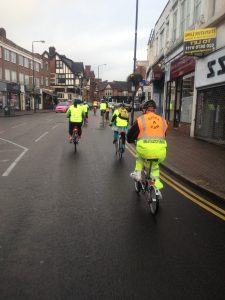 Chris Herman, who had organised the event, had asked Cllr. Reg Adams, Deputy Mayor of Bromley, to join us on our ride and we were thrilled he could make it.  There were also several local dignatories joining us at the start to cheer us off, including Bob Stewart, MP for Beckenham and James Cleverly, London Assembly Member for Bexley and Bromley.  Actor George Cole was there at the start as we lined up for photographs and everyone was in high spirits as we set off.

We cycled for several miles around local streets and although there had been torrential rain prior to the start, we were extremely lucky that the rain held off for the actual ride.   Our destination was SE20 Cycles in Maple Road, Penge, where Winnie handed out prizes for the most brightly dressed rider and the best decorated bike.

We also took away lights and flourescent arm strips to hand out to any cyclists we meet without lights, kindly donated by Winnie of SE20 Cycles.

Thanks to everyone who attended and thank you to Spencer for leading this ride.