This was very much a last minute “I’ve got to go out on Sunday” ride. It didn’t go on the website until Thursday night so there was no expectation of a lot of interest.

The weather forecast was good; bright, dry and cold and that’s pretty much how it was. John, the ride leader, was met at Bromley South at 10 o’clock by Mark, a regular rider, and Sue who was on her first ride with Bromley Cyclists and who was in training for the St Crispin’s day – Night Ride; we were soon on the road. 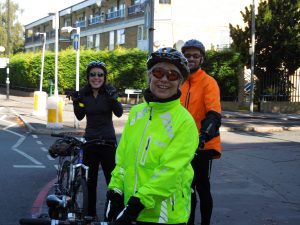 John was using a low-tec sat-nav route map – a tear-off note pad with all the turnings noted down and a Google map on his iPhone as a back-up – more pen and paper than Pentium! – not very sophisticated but hey! it worked. 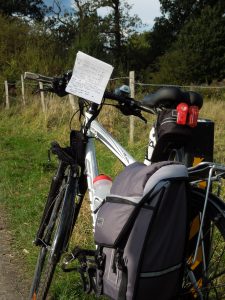 Taking the main road out of Bromley, traffic was quite heavy considering it was a sunday. Lynne was waiting on Bromley Common where the new cycle path opposite Bromley College was tried out. It is OK but is so obviously a second-thought after the planning permission had been turned down the first time; just another missed opportunity!

At Farnborough a diversion was taken into Farnborough Park just for a break from the traffic and to have a look at some very nice houses. 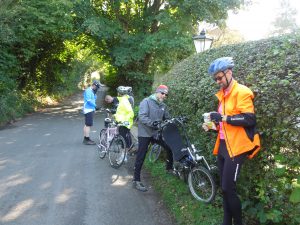 At Halstead a team coming from the opposite direction turned out to be another Bromley Cyclists’ ride – Nev, Steve W and Stewart had just come up Old Polhill and were heading home.Nev took a quick look at and adjusted Sue’s front mech which was misbehaving. 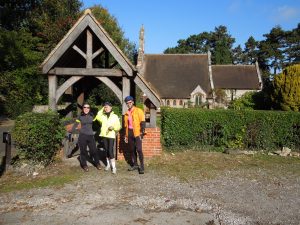 Polhill was avoided by using the much more cyclist friendly Old Polhill, then under the M25 with customary drone of constant motor traffic and out into the East Kent hinterland.

The Sevenoaks Wildlife Reserve was reached just before mid-day for a coffee break and snack; it was a bit later than planned and Sue was using the Bromley ride as launch pad for her much longer ride so she said good-bye and set off to complete a 65 miler. Roy another customer at the centre came over and spoke to the team and showed an interest. He was a Sevenoaks based cyclist so probably not local enough to join in a Bromley Cyclists’ ride but he was given one of the business cards with a suggestion he might like to visit the website. There was insufficient time to look around the reserve.

The next point of note is the intriguingly named Bat and Ball Station. It would be hard to come up with a more novel name for station. It apparently derives from an 1862 inn of that name. Here the ride swings north on the A225 towards Otford. This road turned out to be a dual carriageway and was much busier than expected; the team rode along the footway and made good ground. Otford would have been a good place for lunch but as it was so soon after coffee the ride pressed on; through Shoreham looking very pretty in the bright sunshine.

At the Lullingstone Visitor Centre a comfort break was required and this seemed a good time to take a lunch break. By this time Mark was beginning to eye the clock, he had promised his wife he would be home by 3 pm and he really needed to start making ground if he was going to keep his word. He decided he would press on leaving John and Lynne. Three Catford cyclists were also taking a break at Lullingstone, one who claimed to have done the Tour of Britain in the mid 1960’s; there was no reason to disbelieve him. They too received a business card.

Lynne and John then pressed on to and through Eynsford, Crockenhill and St Mary Cray.

At Petts Wood Lynne was home and so the ride leader peddled on alone.

It was a nice ride. Perhaps a little more traffic than ideal, but most enjoyable for all that.