Twelve riders met at Bromley South for today’s little ride out to Shoreham. Yesterday’s rain had cleared away and it was a lovely sunny afternoon as we set off through the back-streets of Bromley whereby we avoided the hideous A21 on a bank holiday. All riders were in fine form. It was particularly nice to welcome Geoff and Eileen; todays ride had been Eileen’s suggestion so her participation was very appropriate. 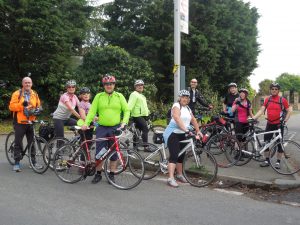 Ibrahim had suffered a puncture at Bromley South, he had done an on the spot repair which held out very well, apart from that there were no mechanical problems. At Orpington we found one of those one way streets which the council has yet to update to two-way for cyclists. We did not allow this little lack of attention to detail on our council’s part mar our enjoyment of their intentions – we decided that if the council were aware of our predicament they would have granted a dispensation. Availing ourselves of the notional dispensation we cycled through.

We crossed the Orpington by-pass and made our way up Maypole Road and so down to Shoreham and the Battle of Britain Museum and tea room. On arrival Linda immediately spotted some of her friends and so got chatting.

The rest of us joined the queue for tea and cakes and were soon sat around a large table in the pretty garden.

After tea some of us paid the £3 entrance fee to look around the exhibits of the Battle of Britain Museum. Housed in three rooms it was packed with memorabilia, much of which had been recovered from the surrounding area where the fiercest dog-fights of this epic battle were fought by the few.

After tea we set off towards Lullingstone and by going through the visitor centre car park were able to take the cross country route to Eynsford, so missing the nasty bit of road on the other side of the River Darent.

The return route was via Crockenhill and St Mary Cray. We were back at Bromley South by 6 pm and calling our goodbyes set off for our homes.

Not exactly sure of the distance but it must have been around 25 miles at a very leisurely pace. There were plenty of hills but we just plodded up and no-one walked, so a special well done to all the riders. You were good company and great cyclists.