I was a bit late setting off for Orpington to meet ride leader Eve today, so took the train. Arriving at Beckenham Junction I realised I had time to nip over to the northbound side of the station to buy a coffee. Cycling is always more enjoyable with a nice hot coffee inside you I always think. I locked my bike on the south bound platform whilst I did the necessary and on my return found it being examined by a cyclist who had turned up in the meantime. 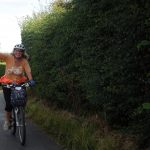 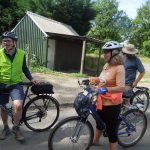 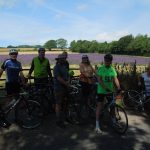 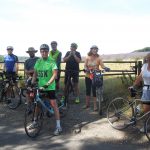 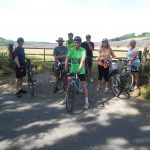 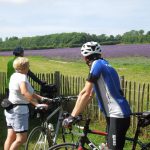 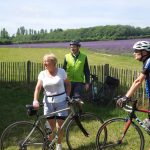 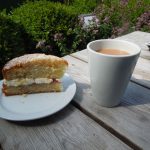 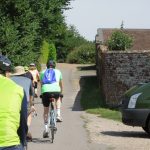 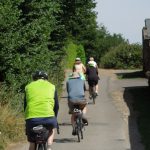 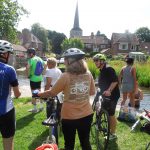 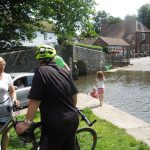 “Hello.” She said. “I was just wondering which idiot had left a bike so insecure.” “Ah me” I replied. “I’ve just been to get a coffee.” I noted that she was clutching a map so I ventured “where are you off to today?” “I’m going explore over here came the response.” Indicating the area around Swanley.

I then explained that I was on my way to join up with Eve leading a loop out to Shoreham to see the lavender fields and wondered if she would like to join us. Yes she would she said. So we introduced ourselves and when the Orpington train arrived we boarded.

As we exited the station at Orpington Eve was just on the point of setting off with 5 riders. I introduced Vera so now we were a ride of seven and later we were joined by an eighth. So a good size considering it was all arranged at the very last minute!

It was a lovely day for cycling: dry, fine, sunny, a few high clouds scudding through, a light cool breeze. We set off at gentle pace towards Green Street Green. There was soon plenty of chatter going on in the group – always a good indication that riders are enjoying themselves.

We took the slightly gentler Watercroft Road up to Halstead with some riders pushing on a bit and then waiting at the top. We then turned down the hill to the top of Polhill and here we took the alternative: Old Polhill. Although still pretty scruffy and untidy I got the distinct impression that someone has been doing a bit of clearing up down here. Anyway it was a nice steady descent, with all of us hanging on to our brakes. Through the tunnel and then down to the top of Twitton Lane from where we had a wide view of the Kent countryside bathed in the mid-morning sunshine. Bucolic bliss.

Following the undulating contours of Filston Lane we cycled through pretty Shoreham Village, noting that the café here is unashamedly touting for business from cyclists with large signs strategically placed declaring our welcome. We resisted the temptation and pressed on, eager to see the lavender which after all was the purpose of the ride. And we were not disappointed. Just before we reached the Lullingstone visitor centre we found the purple fields. Some had already been harvested so this is a ride which probably would not have waited until next week-end.

Here we were joined by our eighth rider – Rob who stopped as we passed and came and joined us for the return ride.

We stopped for a well-earned coffee at the visitor centre and sat on the terrace where Eve ‘sometimes known as Ann’ was plagued by wasps and danced a fandango try to beat them away from her drink.

We took our usual shortcut alongside the River Darent to the Roman villa. This such a pleasant alternative to the busy A225. The path through the field was crowded with walkers today but we were careful and received no complaints or even grumbles. Rob decided to take the road route, which is probably fine for a single cyclist, it only really becomes a problem when there are larger groups.

We stopped to look at the ford at Eynsford. A small car was stuck blocking the river crossing, presumably he had tried to get through the water and broken down.

From Eynsford we took the long climb up Crockenhill Road to Crockenhill and then to St Mary Cray where riders began to peel away to their various home for their Sunday Lunches.