We had closely watched the weather forecast and late on Friday it looked pretty good. By Saturday afternoon the predictions looked a bit more uncertain. It seemed we would probably get a bit damp at some point. So we were suitably kitted out as we met up at Bromley South ready for the off. 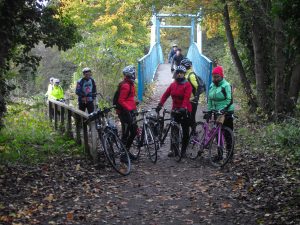 John and Eve had explored the route a few weeks ago; this was Bromley Cyclists first venture to the North of London and something we have been wanting to do for some time. Judging by the level of support we had it is something you have been waiting for us to do.

The ride was inspired by the relatively new Thameslink train services which run from Kent through London to Luton and Bedford making this a logical line of exploration and something that would extend our repertoire so to speak. Only trouble is that the aforementioned direct Kent to Bedford Service doesn’t actually run on a Sunday resulting in the need for a change of train at Blackfriars which is irritating.

Five of us met at Bromley South and amazingly we all managed to smuggle ourselves onto the 0848 service so the careful planning for a second wave of riders coming up on the later train were proved unnecessary. As we boarded we spotted Steve Watkin already on the train so now we were six. The change we were hoping the Stephanie would join us at Denmark Hill but there was no trace, but as we arrived at Blackfriars we got news that she had caught an earlier train and would meet us atSt Albans.

The changeover at Blackfriars was quick and without mishap. It was not until we arrived at St Albans that we realised Toni was in the same train so as we joined up with Stephanie that made us eight. As the train disappeared down the platform we realised that we had left a bag on the luggage rack, fortunately there was nothing to valuable in it, but we were delayed as we made a report and station staff telephoned to try and track the bag down. We eventually hit the road at 1030 by which time we had all got quite cold. 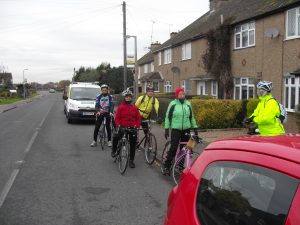 We take a phone call about our missing bag at Colney

Knowledge of the route soon had us bowling along at a reasonable lick and so it wasn’t long before we began to warm through. I suppose it was after about five miles that we received a phone call to confirm our missing bag had been found by the rail company. Quite how it was found or would be restored to us wasn’t made clear, but at least it is in safe hands. The remainder of this section of the ride was very pretty but otherwise unremarkable. Some one pointed out that we wee close to South Mimms and North Mymms. There was/is no real explanation of the different spelling of the town names. Presumably one is a posh version of the other, but which is which I have no idea. If you know perhaps you will send us an email.

We made it to Broxbourne by about 1200 which was really good going, but of course there had been no need to stop and continually check maps this time so perhaps this should have come as no surprise. We paused by the river to take a breather and have a quick drink before we set off again. There was much less of a wind this time and such that there was it wasn’t coming full on into our faces so it was much more pleasant cycling conditions and so we made really good progress to the cafe at Waltham which upon arrival we were disappointed to find closed. 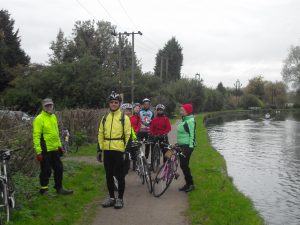 We pause for a breather at Broxbourne

The we’re many more boats on the river this time, with many of them tied up alongside and preparing for winter. Many had solid fuel burners inside and the smell of coal and indeed wood fires was everywhere and was reminder to some of us of bygone years.

We passed under the M25 and reached the Greyhound pub which Eve and I had used on the exploration ride. We decided to give the Greyhound a miss and found the nearby Ordnance Cafe set a little away from the riverside where we enjoyed a very fattening lunch washed down with copious quantities of hot tea, hot coffee and hot chocolate; yummy. 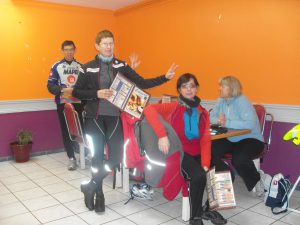 By now were about halfway along the route and the consensus was that it was going well. With lunch behind us we were on our way again and soon crossed to the eastern bank of the river. The towpath is well maintained though there were a multitude of puddles which liberally splattered us with muddy water. We passed down the west side of the dozen or so North London reservoirs with sheep and horse grazing on the embankments. At Springhill Park we found our next cafe where we stopped for afternoon tea and cake which I just about managed having barely digested the mega breakfast which I had greedily ordered in the Ordnance Cafe. Anyway with a little will power I managed a hefty piece of very nice bread pudding with more hot tea – oh the sacrifices one has to make on occasions. 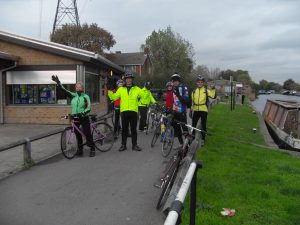 As we reached the Olympic Park Steve stepped forward with a slight diversion which would make it easier for some of us to find their way towards their homes in the Sutton area. We followed an unnamed waterway west for a mile or so which took us along the southern side of Victoria Park before we eventually turned South again. At Limehouse Steve was now on the right side of the water to lead Stephanie and Toni to London Bridge. The remaining five continued to the entrance to the Greenwich tunnel where at five o’clock, it was lighting up time. Thankfully the tunnel lifts were working, so we were able to make our way down in comfort. The tunnel was in full use with scores of folk walking through in both directions. On the southern shore we needed a comfort break; we asked in Nando’s Restaurant, we were turned away and directed to some public conveniences we neither knew nor cared where. The staff at the nearby Gypsy Moth pub were much more agreeable and happily let use their facilities. Thanks Nando’s; duly noted. 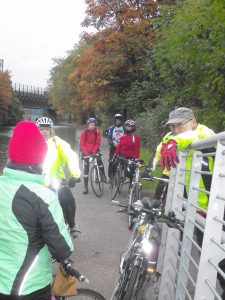 So we set off for the final leg of our outing; the all too familiar ride down through Brookmill Park and then the Waterlink Linear Park to Beckenham where we finally split to go our separate ways. It was just beginning to spit with rain when we said our goodbyes so great timing.

Nice ride which we will definitely want to do again. And lovely company, in particular Toni and Stephanie from Pollards Hill Cyclists.