At 9 o’clock there were five of us at Bromley South: Geoff and Eileen, Chi (strangely not disaffected after his previous experience with us), me and a man who looked just like Andrew Fergar but introduced himself as our ride leader – MR HILLS!!!! 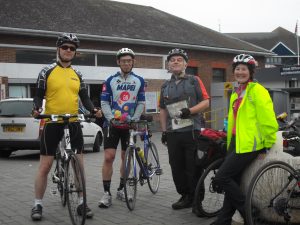 Mr Hills was kind enough to have printed out a copy of the days route for us so we were able to see in detail what torture he had prepared and lay ahead. No-one else was expected to join us; others had sent apologies, so with a final check of our bikes we were off; Geoff led at a steady brisk pace. The weather forecast was dry with overcast skies and that was pretty much how it was. There was no wind and it was pleasantly cool.

We followed the usual route southbound out of Bromley; passing the Fox at Keston, then Fox Lane and out towards the Metropolitan Police Dog Training School in Layhams Road when we realised we were being overhauled by the rather familiar figures of Nev Medhurst and Steve Hardy leading out the Velo Club on a quick Saturday morning training ride. Linda was on her smart new bike, very nice!!

We chatted for a while before heading off on our separate rides. Today we avoided the White Bear at Fickleshole by carrying straight on in Layhams Road and Skid Hill Lane.

Skid Hill Lane became Heslers Road and here we were caught up by a large group of Dulwich Paragon cyclists. We turned down Heslers Hill. The road here appeared to actually go over the edge of a cliff, as we neared the precipice we realised that this was a pretty reasonable description of the hill we had to descend. The road surface was very uneven and although it was a short hill it was extremely steep and pretty unpleasant. Thank goodness we weren’t coming up it is all I can say.

At the bottom of this hill we commenced a long steep climb to The Ridge, which is the high point of the North Downs. We noticed that there were lots of grain crops in the fields which looked pretty ripe and ready for harvest; surprised the farmers weren’t making the best of the dry conditions.

We passed the top of the infamous and much talked of Titsey Hill and turned downhill along Pitchfont Lane passing underneath the M25 and into Oxted. Here Chi had an altercation with the verge but apart from a few minor grazes he was unhurt and OK to continue.

The people of Oxted must be a drunken lot; every second building in the High Street seemed to be licensed to sell booze. It’s an alkies dream.

Continuing south from Oxted we passed the neatly mowed grass of Broadham Green. It very much looked to me that it had received its final cut of the year. This was a deceptively flat part of the ride today and I suppose it lulled us into a false sense of security. In fairness to Mr Hills he did tell us that there were some savage climbs ahead. 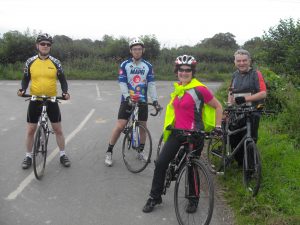 We turned eastwards to traverse the southern edge of our ride and arrived at the bottom of Crockham Hill. It was mid-day and we decided that it was perhaps a little early to take lunch at Limpsfield at the top of the hill so we decided that we would press on to Cudham where we would be able to visit the Blacksmiths Arms – target for the weekly wander next Wednesday.

Crockham Hill is an enemy of the people! I will say no more on the subject.

At the infamous Grasshopper gastro extravaganza we crossed over the old A25 and tackled the next devilish challenge – Clacket Lane. We passed the entry points to the motorway service areas, both open. I harbour the rather childish ambition to ride intoClacket Laneservices on my bike just to see the faces of the motorists. I don’t suppose I shall ever do it, but I’m sure the reaction would be fun to watch!! Turning east at the top of Clacket Lane we followed the Pilgrims Way parallel with the ridge of the North Downs high on our left.

At the bottom of Sundridge Hill as we turned north towards Knockholt it was time to get our climbing gear on again, here I took a photograph as a memorial that could be sent to the relatives of those who didn’t make it. Together we struggled with this merciless and unforgiving monster and eventually overcame it, arriving at the summit broken and incoherent. I am sure I could hear Mr Hills sniggering fiendishly behind me. I thought I spotted a couple of dead cyclists lying by the roadside; doubtless left to rot since his last outing. 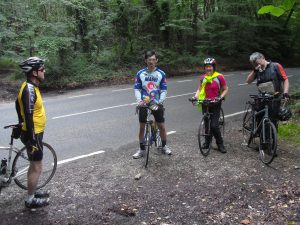 The Blacksmiths Arms is a really lovely country pub with the most beautiful and well maintained of gardens. It must cost a fortune to keep it looking so nice. By the time the wanderers arrive there next Wednesday it will be dark so I’m afraid they will miss much of this, which is a shame. We sat in the garden and lunched, the food was excellent and not terribly expensive either. 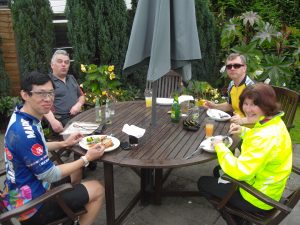 Leaving the Blacksmiths Arms there was just one more uphill section of the ride – to Downe, before we began the long downhill run all the way to Bromley. We passed Christmas Tree Farm which appeared to be doing a roaring trade. At Keston we said goodbye to Geoff and Eileen when they peeled off for a more direct route to Beckenham. Chi and I escorted Mr Hills’ back to Bromley to ensure he couldn’t do any more mischief. At Bromley south we said our goodbye’s and headed for our homes and a hot bath.

Despite my teasing this was another well organised and highly enjoyable ride; thank you to Andrew for leading us and thank you to everyone else for being lovely company.