Despite the appalling weather conditions, we had a good turnout for our ride up to London to join The Big Ride.

We left Bromley South around 9.00am and headed for Catford Bridge, where we were to meet up with our other friends from Catford and Penge. 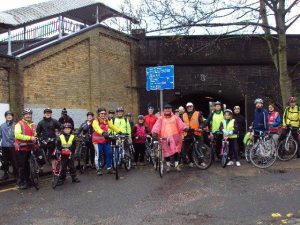 Then on through the Waterlink Way and Peckham.   It was around this time that we encountered our first puncture, so Spencer stopped to help while the rest of us carried on.  Not a mile further on and there was a second puncture, so everyone headed for the Cafe until the punctures were mended.  Our thanks to Chris Jones who just happened to be passing at a very opportune moment and had the right tools for the job.

Now we set off again, trying to make up a bit of time as The Big Ride was due off around 12.00 noon.   Superb timing as we arrived at Hyde Park just as the ride was about to leave, so we immediately joined the 10,000 other cyclists and made our way slowly around Piccadilly and Trafalgar Square to the finish along the embankment.

At the start line politicians from all the main political parties were presented with the 37,000 name Love London Go Dutch petition, calling for streets that are safe and inviting for cyclists.   The event was well attended by the media and you may well have seen it on the news last night. 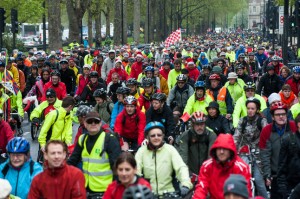 At one point the ride stretched from the north end of Park Lane all the way to Piccadilly, with more still arriving.   People had really entered into the spirit of the occasion, many being dressed in Dutch costumes, I even spotted a herd of zebras.

A very successful ride and thank you to everyone who joined us.