The Cheese Run – a Kentish Ride from Otford

Andrew located our fellow riders on the train; Geraldine, Noor and Sonia. Unbeknown Colin was also on board and we met with him on our arrival at Otford. 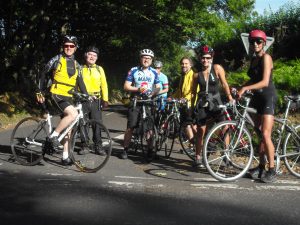 It was a glorious September day. The atmosphere had that sort of milky haze to it. The sun was strong and warm. Once we had done the introductions the eight of us were off.

Kent is the Garden of England as we all know and today under bright sunny skies the garden looked at it its best. Fields cleared of crops had been ploughed ready for a winter planting, bales of straw drying in fields and waiting to be put away into storage, contented livestock basking in the warmth and happy cyclists on a sojourn from the busy city just soaking it all up. And it’s all free!!!

So what of our happy cyclists: I had not met Geraldine before but she is a regular on rides likewise Colin is also a regular cyclist, being a member of Southwark Cyclists, but this was his first ride with Bromley.

Now Sonia and Noor were definitely in a different category. This was their first ride out with a group. Noor had only started cycling recently when she decided that she would do a TRIATHLON – not the obvious entry level one might say. Sonia is an experienced cyclist who has ridden extensively in Kent but usually alone or with her friends. Sonia had also trained to complete the triathlon but unfortunately had been unwell on the day and so unable to join Noor to do it. 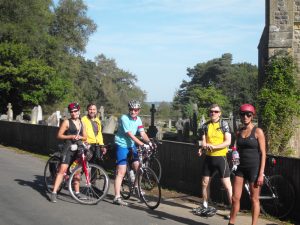 The terrain for today’s ride was mainly undulating but there were a couple of pretty serious hills – Vigo Hill being the foremost of these. Our route took us past the villages of Noah’s Ark, Seal Chart and Ightam Mote (pronounced ‘item’). Geoff led and kept up a brisk pace and there were various pauses along the way to let the slower riders catch up. 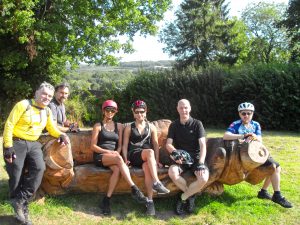 At Dunks Green we paused and the Land Lady of the Kentish Rifleman Pub on the Green was kind enough to open up so we could take a comfort break. We took a group photo and pressed on passing through Plaxtol and then up a long steep hill to Crouch where we realized we had left a bag at Dunks Green. There was nothing for it but to go back. In fact I phoned the Land Lady of the Kentish Rifleman and she confirmed that the bag was indeed still there so she would keep it safe until we collected it. This set us back a little but we still thought we would make the Cheese Farm Shop before it closed at one o’clock. But then another delay when the puncture fairy struck. Despite being a front wheel this took a little longer to fix than it should have done and so Noor and Sonia phoned ahead to let the shop know we were on our way. They kindly said they would stay open for us if we were a bit late. 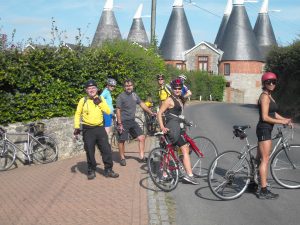 Only Geoff managed to reach the top of Vigo Hill without walking. Well done Geoff I am sure that in your day job you wear a skin tight blue lycra suit with a big yellow S on the front. 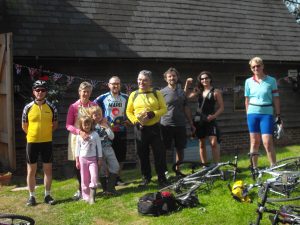 It was just after one o’clock when we arrived at the Winterdale Shaw cheese shop and they were waiting for us as promised. We had a lovely reception. We stayed a while chatting and buying up cheese to take on our way. (I can now report that the cheddar cheese made on the farm is absolutely delicious, little surprise then that amongst the outlets where you can buy  Winterdale Shaw Cheddar is Fortnum and Masons and Harrods). 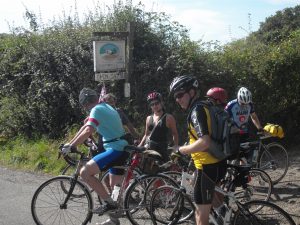 Having delayed the shop much longer than we should have we bade them good bye and set off for lunch at Stansted. On arrival at the Black Horse we found the place packed with cyclists doing a sponsored cycle ride in aid of charity. Ten pubs; a pint in each. They were a happy band and clearly a long way into their ride. 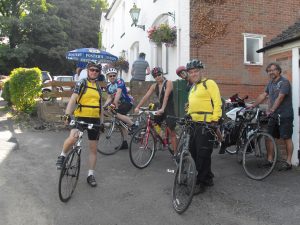 We settled into the pretty garden of this charming and unspoiled country pub and had a most pleasant lunch, swapping stories and enjoying the sunshine.

All too quickly it was time to press on again. Geraldine left us here so we continued as seven. Geoff leading and Andrew and I acting as back markers. We skirted around New Ash Green and then through Hartley. Soon we could hear the roar of motor engines from Brands Hatch.

There was a long hill up around the outside of the racing circuit passing through Paddock Wood before we got to West Kingsdown at the head of the wonderful Knatts Valley; miles and miles of lovely downhill through this beautiful landscape. We passed Hollywood Cottage of Kenneth Noye and Brinks Matt infamy.

We were hurtling past the Lion at Farningham when Noor and Sonia called a halt and said they would like to buy us all a drink; a generous offer that none of us could refuse. We sat beside the River Darent in the late afternoon sun and generally decided it had been a wonderful day and everyone agreed that the sooner we could all get together again for another ride the better. 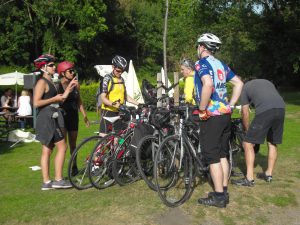 Finishing our drinks and thanking the girls for their kindness we set out to get the 5.45 from Farningham Road. We took a final picture and said our good byes on the station because we would all get separated on the train. 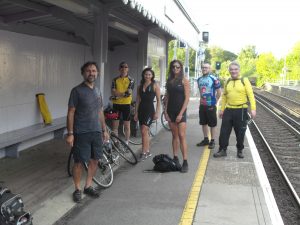 The hope is we all get together again in the very near future for another ride.

Thanks to Andrew for organising and to Geoff for leading and to everyone else for being lovely company.