I picked up one rider at Bromley South and three more at Norman Park. We didn’t hang about long. There was a chilly wind.

There was a Park Run Event in the park which would have made cycling around the perimeter track, if not dangerous to the runners, then at least inconsiderate, so we cycled along the A21 and then into Hayes Lane where the road surface is appalling. Poor road surfaces were to be very much a feature of this ride unfortunately, but I shall not be dwelling on negatives today.

It was immediately clear that the riders were in good form and were keeping up a good pace. This was very promising because we were aiming for an 11.30 deadline at which time the grand opening of the Edenbridge Pitsop was scheduled. We paused for a drink at the White Bear (water in the car park I hasten to add before anyone starts getting the wrong idea!!) where we met a large group of Dulwich Paragon Riders doing something similar; and guess what – they said hello to us, which was quite unexpected. Again we did not hang about but were soon bidding Dulwich farewell and heading out onto the lanes again.

At the top of Titsey Hill we stopped for a discussion about whether to go down the Hill or perhaps use the bridle way through the Country Park. It was a short discussion; we took the hill and rattled down on a very poor and sub-standard surface. At the bottom of Titsey Hill I missed a turning. Having now had a look at the relevant junction on Google Streets it is little surprise we passed it, it is no more than a hole cut into a hedge. Fortunately one of our riders used to live in Edenbridge and so was familiar with the area and able to navigate a new route which was fine, though busier than I had hoped for. 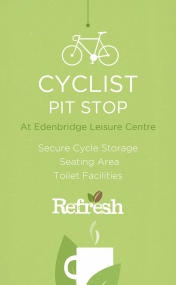 The road into Edenbridge was perhaps the worst surface we encountered all day, but at almost exactly 11.30 we turned into the Edenbridge Sencio Leisure Centre. There was cheering and waving as we nosed through the car park to the bike parking area where we were greeted by members of the Leisure Centre staff team led by Mr Adam Perry. But to top it all the Chairman of the Town Council, Councillor Mrs Jill Davison, was also in attendance and wearing her chain of office too. We felt like we had just crossed the finish line of the Tour de France. We were made most welcome and after a photo shoot with our bikes and for the official cutting of the ribbon we retired into the centre for some refreshments. There was tea and coffee and soft drinks. We were plied hot sausage rolls, well filled sandwiches made with delicious speciality bread and to top it all it was all free.

We chatted to the staff members and the Chairman of the Council who then very graciously showed us around the centre. We were informed that the centre was built from a legacy left to the town by a former bike shop owner. The town council had since added to the building and made it into a very modern community utility. The idea of developing the Cycle Pitstop came as result of a bunch of cyclists stopping on someones drive in the town whilst they mended a puncture. It was realised that a facility for such a repair was required and so the Pitstop idea was born.

We stayed at the Pitstop for over an hour, and when we emerged it was clear there had been a dusting of rain. The sky looked very grey and heavy.

We had now turned north eastwards and into the wind which was very cold in our faces. We upped the pace to keep warm and soon found ourselves on the lower slopes of Ide Hill. We pressed on for the summit and I was quite pleasantly surprised at the gradient. We stopped towards the top where we encountered some motorcyclists receiving tuition from motorcycle policemen. The views out over Bough Beech Reservoir even in the gloom of today were stunning.

At Bessels Green there was queuing traffic because of road works we simply wriggled past and were soon through Dunton Green and in the quiet lanes paralleling the busy Sevenoaks Road. We stopped in the filthy car parking area at the bottom of Old Polhill to switch on headlights before we started the climb. It was my first time up Old Polhill and it was better than expected. At the top we collectively decided that the need for a clear-up on Old Polhill is a priority and that we would set a date and return with brooms and other kit and give it a spring clean.

We cycled on up to Halstead and then down Stonegate Lane to the A21 and so back to Norman Park.

As I have sai earlier this was a really nice ride with good cyclists working well together. Well done to everyone but in particular to the rider who had recently taken a tumble and had badly bruised ribs.