The extended version of the Viking Trail today was a truly magical Christmassy Ride. Steve with Geoff’s help led us faultlessly for nearly 60 miles despite only knowing the first half of the ride. 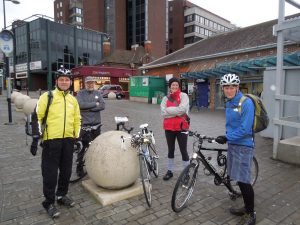 There were seven of us on the 0922 train from Bromley South: Steve, Michael, Geoff, Tessa and John; Stephanie and Toni were already on the train when the five of us boarded. It was a dull grey day but it was a day with a hint of promise that there was some better weather over the horizon. 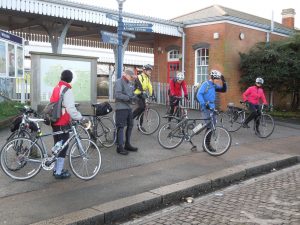 We get our bearings at Whitstable

We arrived at Whitstable at half past ten and after a few moments getting ourselves orientated we were off heading East with a very stiff breeze on our tails, but also a beautifully bright warm sunshine on our shoulders. Passing along the raised path across the marshes of the North Kent Coast we were soon warmed through and removing layers of clothing. On the occasions that we stopped it wasn’t long before the chill wind penetrated our clothing and we were itching to get moving again. 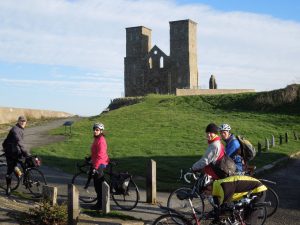 Blown along by the tailwind we made great progress, it was almost like being powered by an electric motor. Cyclists and pedestrians coming towards us were labouring hard into the headwind. Steve had originally planned to do the route in the other direction and had changed the plan when he realised just how much a factor the wind would be – well done Steve; good decision.

We passed the interesting and well preserved Reculver Castle high on the cliffs overlooking the Antient Saxon Shore Way. Further along we passed Kingsgate Castle and the North Foreland Lighthouse all resplendent in the glorious sunshine. As we descended into Broadstairs we were aware the wind had moved to our right shoulders. Broadstairs is a pretty little historic coastal town and none of us resented being expected to dismount and push along the narrow pavements, it just gave a slightly longer opportunity to see all the attractions,

We reached Ramsgate at one o’clock on the dot and enjoyed lunch in the seafront fish and chip restaurant. It was nice to get out of the wind for a while, the sky had clouded over by now too. Tessa left us after lunch to get the train home, so we continued as six and soon reached the Viking Longboat after which the trail is named. 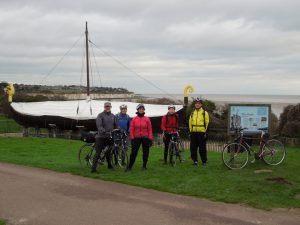 It was not three o’clock before we reached Sandwich, despite a puncture. What a little hidden gem Sandwich is; Steve seemed to lead us in circles around the town and I was amazed that we popped out the other side on NCN Route 1, the main cycle route from Dover to Scotland. 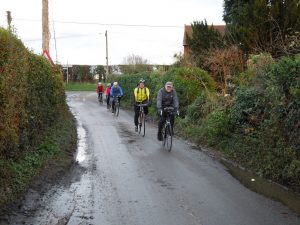 Route 1 is well sign posted here and we turned into the wind and began to head West towards Canterbury. Steve had already commented that he thought this might be the least attractive part of the ride. Oh how wrong can one be. The westering sun was poking out from the banks of clouds away to the West throwing an almost magical light across the landscape. Fields cultivated with winter vegetables or ploughed ready for spring planting; trees and hedgerows clinging to their last few leaves against the coming frosts and snows, houses decorated ready for the coming Christmas festivities. It was like a fairy tale. 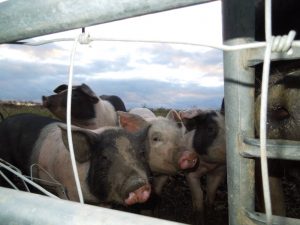 The Red Lion at Stodmarsh was doing a roaring Sunday lunchtime trade, we could see a hearty fire in the grate warming the happy drinkers as we passed. It was as well Steve didn’t take a vote on whether or not we should stop. I am sure we would still be there now.

Just before we reached Sturry at a place called Fordwich, as the last light of the day faded, we nearly missed a tiny little turning leading to a path which is NCN 1 at this point. Initially the path crossed meadows alongside the River Stour. In the half light and led by Geoff with his spotlight we made good progress. However it wasn’t long before the path led us into woodland and darkness was upon us. We battled on but the path was barely visible at points and often the metalled surface gave way to deep mud. Progress was difficult until we reached a tree fallen across the path, where we were halted as we tried to negotiate a route around it. Climbing through the hedge we eventually got going again and shortly afterwards reached the outskirts of Canterbury and roads with street lighting.

It was the intention to continue to Whitstable but Steve was aware that the Crab and Winkle way on which we were intending to ride was similar in nature to the NCN track we had just left and we reluctantly decided that in the interests of common sense and safety it would be wise to end the ride here and catch the train from Canterbury East.

We had a short wait for a London bound train and were soon bowling along back to Bromley South and our homes.

This was a fabulous ride, what a really lovely day’s cycling; thanks to Steve and Geoff for devising and leading it, and thank you to everyone who came along you were great company.