Today’s ride was a rerun of the aborted outing of the same name earlier in the year during June; the wettest June on record when the rain was so bad we cancelled the ride half way. Today though it was a fine and bright start to an early autumn day as we gathered at Orpington Station. 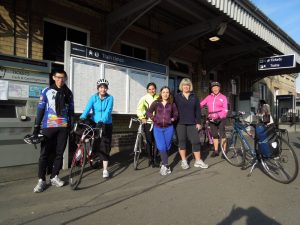 We were seven and expected to meet Spencer and his son Jack en route. Eve was our ride leader today and in the absence of the usual back up team I was nominated as tail end Charlie and chief helper. This was a fantastic turnout by the girls who numbered five. So well done ladies for valiantly representing the female side of cycling on our ride. (Chi and I felt pretty lucky too!)

As Bromley Cyclists we are so fortunate to have ready access to such lovely countryside within a just few miles of the borough. We are even luckier to have a team of dedicated ride leaders who give up their time to plan and then take us out on rides through this charming county.

One of the great benefits of starting from Orpington Station is that no-one wants to hang around there; so we were soon on the road. Although to be absolutely fair even Orpington station looked cheerful in the bright morning sunshine.

Eve gave her customary pre-ride briefing before we set off at a steady pace and we were soon crossing Sevenoaks Way into St Mary Cray. The air temperature was cool but there was no wind and we were soon beginning to warm up. There is a long hill out of St Mary Cray to Birchwood and Swanley Village, as we paused at the top we had news from Spencer that he was not feeling well and he and Jack would not be joining us. We passed underneath the M25 and continued to South Darenth where we crossed the bridge over the River Darenth: Green Street Green then Bean and into Ebbsfleet and Northfleet; and so toGravesend. We stopped for a quick photo outside the old and somewhat dilapidated Sikh Gudwara before cycling to the nearby new one. Of course the last time we passed this way it wasn’t possible to stop because of the weather. But this morning we paused a while to admire this huge temple which dominates the landscape and looks so out of place in its shabby surroundings. 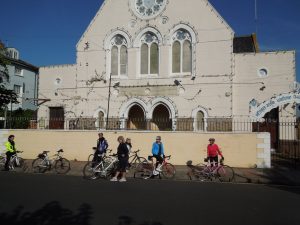 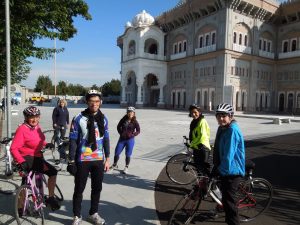 The ‘Promenade Cafe’ on Gordon Promenade atMiltonis of course a popular stopping place for cyclists on Route 1, the sort of Watford Gap Services of cycling if you get my drift. This friendly and welcoming establishment was doing a good trade as we pulled onto the forecourt. We stopped for late elevenses or early lunch. 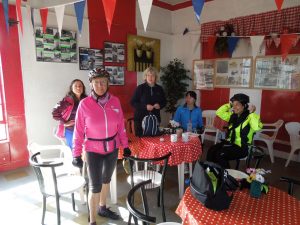 This area is a tribute to General Charles George Gordon, better known as Gordon of Khartoum who was a great patron to the community and to whom there is a memorial in the nearby park. And here’s a thing: The Promenade Cafe of Gravesend was opened by the Mayor of Gravesend, Alderman R.N. Fletcher in April 1952 when it was described as the first really new thing produced in Gravesend since the war.

We were later arriving at the cafe than intended but still in good time as far as the ride was concerned generally.

We treated ourselves to teas/coffees cakes etc. It was not quite warm enough to sit outdoors.

National Cycle Network (NCN) Route 1 is the major cycle highway from the Shetland Islands to Dover. It passes the Promenade Cafe and so the next stage of our journey is on this ‘major route’!!

If ‘major route’ has you thinking of the M1 motorway then I can assure you nothing could be further from the reality.

Winding its way along decaying cobbles between derelict wharves and warehouses it eventually pops out at the disused Thames and Medway Canal. The towpath is passable but is more a tribute to those who built it than those who maintain it.

Departing the cafe we joined Route 1 across West and Eastcourt Marshes past the firing ranges which were in heavy use.

Here the puncture fairy struck, we attempted to do an on road repair, this proved a mistake as within a mile and half the repair failed and we had to stop again. In total we lost the best part of an hour sorting this out which set us back quite a lot. 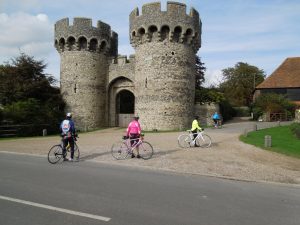 Just north of Higham we joined the Heron Trail which is a circular route on the Isle of Grain passing through Cooling, Cliffe and High Halstow. We stopped at Cooling Castle where Eve told us that her daughter had got married. Some went into the grounds to explore but we didn’t stay long. Next, just around the corner, we paused to look at the children’s graves made famous by Charles Dickens in ‘Great Expectations,’ in the grounds of St James’s Church. 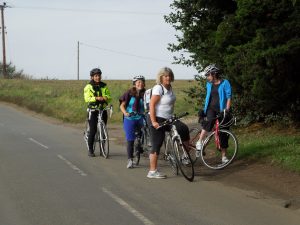 We saw plenty of birds, but no Herons

The Island looked tranquil and fertile in the afternoon sunshine. Ploughed fields, some already planted with winter crops, contented livestock grazing in sleepy pastures. We passed several rather nice looking pubs which were inviting but time pressed and so did we.

The ride passes near the RSPB Northward Hill Reserve where if you stop you can see 150 pairs of grey herons – hence the trail name. The reserve includes great swathes of flat marshes, where lapwings, redshanks, and avocets breed. In winter you can see wigeons and teals, buzzards, hen harriers and merlins. It was a pity that we didn’t have time to stop and continued into the wonderfully named Christmas Lane. We had a brief pause for a standing snack as we turned west to start the long ride homewards.

We arrived back at the Promenade Cafe at 4.30 fully expecting it to be closed. But joy it was still open and we took a break for a very welcome cup of tea and a cake or in my case a jumbo sausage. We were also able to establish that one of our number was unhurt after a tumble in the tiny narrow alley which passes for a cycle way – NCN Route 1. There will be a letter about this disgraceful piece of cycling infrastructure. The last time I came along here I too took a fall, and bashed my knuckles into very poorly constructed fencing. 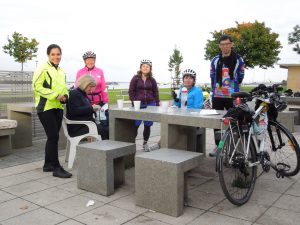 Joy – it was still open

We didn’t dally long on the promenade and were soon climbing out of Gravesend through Northfleet. Stumbling at a crossing point Eve informed us that since she had raised her saddle she ‘was having trouble getting her leg over,’ something I too am familiar with though it’s got nothing to do with the height of my saddle!!

There were some tired legs as we cycled back along the morning’s route. But keeping a steady pace all were able to keep up and keep going. There were some lovely downhill sections along the way and one or two uphills too. Chi left us at St Mary Cray.

The light was beginning to fail as the rest of us got back to Orpington Station. Linda departed to collect her car. We said goodbye to Eve at Petts Wood and the rest of the team split up at Shortlands by which time it was fully dark, (fortunately most of us had lights.)

This was a fantastic day. We covered nearly 60 miles. Some of our riders were not particularly regular riders so they did exceptionally well.

Our especial thanks to Eve who led us brilliantly. No maps and not a single wrong turn.