We cannot say we weren’t warned. But nothing could have prepared us for the rainfall which eventually defeated us on this ride. We gathered at Orpington Station. We were five: Eve our ride leader, Steve Watkin all laid back on his recumbent, Mike, Stephanie from Pollards Hill and me. It was mizzling: we were all wearing waterproofs. We had all studied the forecasts and separately come to the conclusion that light rain was not enough to prevent the ride. Spencer and Toni had called, Toni to say that having set off she was unable to see through the rain and so had turned for home, and Spencer to say he would join us en route. 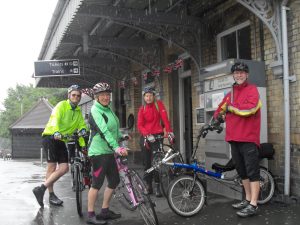 Ready to go, note the rain

We set off and soon the rain abated and we found that we needed to shed clothing as we were overheating. For a while it was quite bright but the road under wheel was still very wet and there was a lot of debris on the carraigeways which had been washed out during the torrential overnight rain.

At Swanley I became aware of a car following us at a low speed and holding back a very sensible distance. It was Spencer and his son Jack with their bikes on the roofrack who were joining us.

Now we were seven which considering the weather was quite respectable. 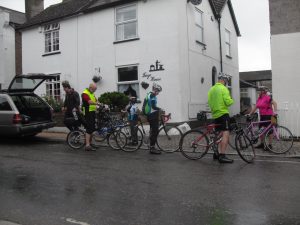 Spencer and Jack joined us at Swanley

There were a couple of light showers as we progressed and we were never quite sure whether we should have waterproofs on or not. However at Longfield what started as light rain became heavier and heavier until by the time we reached the junction with the A2 at Northfleet we were pedalling through a deluge of truly biblical proportions. The rain was sheeting out of low, heavy, dark, grey, clouds and overwhelming the gutters, the drains, the road surface and us. There was absolutely no shelter so we trundled on and anyway we couldn’t have got any wetter. As we descended into Gravesend Eve called a halt and we waited for a while as we watched water coming down a drainpipe and spurting two feet into the air out of a damaged joint.

During a short break in the weather we decided to make a dash for the cafe. But no sooner had we broken cover the heavens reopened and the onslaught continued. Gravesend is renowned for its magnificent new Gudwara, and Eve led us through the downpour across the forecourt of this fantastic edifice. It was such a shame that we could not loiter to admire this wonder which looked so strangely out of place on the sodden residential landscape. It was too wet to even take a photograph. Quite what the worshippers made of us I dare not ponder.

We finally and gratefully pulled into the Promende Cafe and stripped off our soaking clothing. Everyone ordered a hot meal and lashings of hot tea to ward off the cold which had set in immediately, and we sat watching the rain as it poured down. For a while we were barely able to see the river not fifty yards away across the grass. (though I did notice an elderly gentleman with two sons loading a wooden houseboat with pairs of animals!) 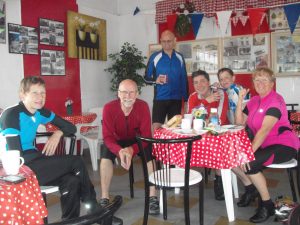 We decided to abandon and go home

After an hour with the rain still falling the decision was reluctantly made to abandon the ride and catch the train home. We pulled on our sodden clothes and rode to nearby Gravesend Station and caught the 1202 to London. We got separated on the train so it wasn’t even possible to say proper goodbyes.

The ride will be rearranged and we will get to do the Heron Trail. Perhaps you will be able to join us so watch the Rides and Events page for the re-run.

Finally a sincere thank you to Eve for being a super ride leader.