Andrew Fergar is renowned for his hills. The website announcement for today’s ride screamed “…..and lots of hills!” So I think we were all prepared for the worst and, may I say, we were all very pleasantly surprised. Today’s route was not flat but more a rolling route through pretty countryside, which made for a delightful bike ride on a summers day.

Romney Street is a tiny hamlet from a by-gone age at the head of the Knatts Valley in West Kent. It is at the high point in a triangle formed historically by the A225 Sevenoaks to Dartford Road in the west, the A25 south of London by-pass and the A20 London to Dover Road to the east. In pre-motorway days Romney Street and its hinterland would have been in danger of becoming ‘the land that time forgot’. Then came the motorway building explosion of the 1960s, ‘70s and ‘80s, when the M25, the M20 and the M26 were superimposed over this fragile road network; Romney Street was further isolated; and nowadays it slumbers in bucolic bliss. The area is popular with hikers and cyclists, and largely forgotten by everyone else.

We mustered on the forecourt of Bromley South Station in the sunshine (for those that have forgotten or for the very young who have never actually seen it; that is the big yellow thing rarely seen in the skies of England). Andrew was eager to get started on time, so after the customary ‘group photo’ we got under way.

Now please don’t get the wrong idea that the next picture seems to be showing us on the first stop of the day about a mile into the ride at the café next to Bigfoot Bikes at Hayes. It was just a very short natural break before we were off again. 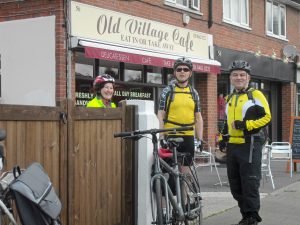 The warm sunshine soon had us peeling off layers of clothing, there was even some sun-cream applied a little later in the day. The conditions were deceptive though; as soon as the sun disappeared into the clouds the temperature dropped markedly. But after the recent rain none of us cared!

It was certainly a day for cyclists. We encountered dozens on our ride today; many, if not most, sporting the Bigfoot livery. I was bit slow with the camera but I am pretty sure that I saw one burly looking rider with stick-on false “Bradley Wiggins” sideburns. Personally I feel that’s taking hero worship just a little too far – but each to their own.

We skirted around Keston on the way to Downe keeping to the east of Biggin Hill Airport. We didn’t loiter at Downe House but it certainly looked a lot tidier than the last time I passed this way (several years ago).

We then turned east to pass through Halstead at Rushmore Hill and crossed underneath the M25. We suddenly found ourselves surrounded by the purple fields of Castle Farm and the most glorious smell of lavender. We paused for a while to soak it up by a field of horses who seemed very disappointed that we had no sugar-lumps or carrots with us. 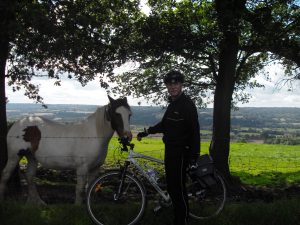 A little further on we called at the ‘Hop Shop’ where Geoff was tempted to part company with some of his cash. Anna treated us all to some of her home made flap-jack which was absolutely brilliant and certainly made up for not having a café stop on this ride. Thanks Anna, I shall be trying out your recipe. 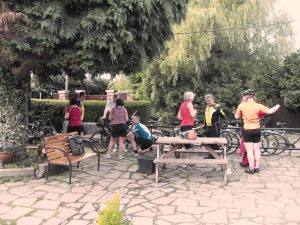 We enlist some help at the Fox and Hounds

There was a short comfort stop at the Lullingstone Visitor Centre, before we started on the three mile hill which Andrew had warned of. As we climbed we could hear the sound of high powered engines in the near distance presumably coming from the racing circuit at Brands Hatch. Now it would be wrong to say that the three mile hill was a breeze, but I have experienced Andrews’ hills before and this was nothing by comparison. And the reward at the top of the hill: a very pleasant view across rural Kent, and lunch at Romney Street in the Fox and Hounds. Here we enlisted the help of another group of cyclists who were just finishing their meal and who were kind enough to check Anna’s front mech which had been misbehaving. 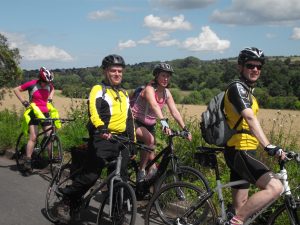 We idled over lunch awhile before setting off for the long downhill ride along Knatts Valley through Farningham into Eynsford where we just had time to take another group snap before heading to the station. I am certainly glad we weren’t expected to ride through the Ford which looked very deep to me.

We arrived at Eynsford Station with about three minutes to spare and caught the train home.

Top marks to Andrew for an excellent ride and thanks to Anna, Geoff and Eileen for being lovely company.