There were seven riders on the train from Orpington and we met another on arrival at the start. Our Viking Trail Ride was a wonderful day out on a very popular route around the east most tip of Southern England.

The ride started under grey skies but in truth in spite of the forecast the weather looked quite promising; it was not to be, although we didn’t get any heavy rain until well after the lunch stop at Broadstairs. It would be further fair to comment that the rain did nothing spoil our lovely day. 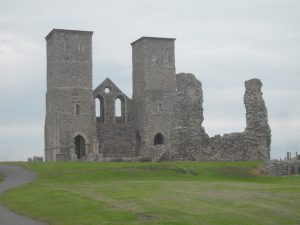 The Monastery at Reculver

Other pictures below report.

The route passes through Reculver, Minnis Bay, Birchington on Sea, Westgate on Sea, Margate, Botany Bay, Broadstairs and Ramsgate. There is also the inland bit through Minster, St Nicholas and Monkton.

We took the opportunity to look around the old Monastery at Reculver. This was something most of us had not done before and the ruin appeared well preserved and cared for; surrounded by neatly cut grass it was a pleasure to wander around the walls of this substantial building dating back to the 7th century. There are wonderful views to both east and west along the North Kent Coastline. The only blot being a massive block building far to the East in Margate which I took to be the Turner Art Gallery but which turned out to be, on closer inspection, a single hideous block of flats that would not have looked out of place in any inner city slum.

This happened to be my second visit to this part of the world this week and I have to say that much as I love Margate it is in desperate need of a lick of paint and some TLC. In its heyday I am sure Margate would have been the Riviera of the South but those days are long past, and I truly think Margate deserves better. The Winter Gardens, nestling amongst the cliffs is a prime example of a building long gone to seed and that a little effort would restore to some of its former glory.

By contrast Broadstairs is a vibrant tourist centre. It was here we stopped to have lunch in Chiappinis a bright and shiny Italian deli. The food was excellent, especially some small pastries I was introduced to called Conelli – absolutely delicious. I bought some extra to bring home. As we cycled through the narrow streets precariously clinging to the heights every second building seemed to claim some connection to Charles Dickens who lived here.

At Broadstairs we were quite high on the cliff, to reach Ramsgate we cycled down to sea level and passed close to the busy, crowded marina before climbing back up to the cliff top on the far side. The last time we were here the docks appeared abandoned but today we could see rows and rows of new cars all lined up waiting for collection either by ship as export or more likely train as an import.

At Pegwell the Viking long ship, which does not date back to the Viking Raids in the 8th century but is relatively modern, had been stripped of its awnings and was looking very splendid in the pouring rain. We didn’t loiter long here as we were quite wet by this time.

All riders agreed that Tracey led a lovely ride at a great pace. The riders were good company and all worked well together.

All in all a lovely day out. 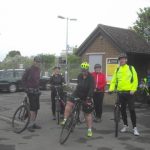 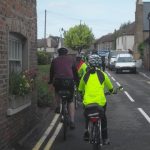 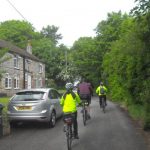 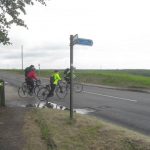 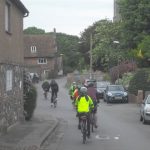 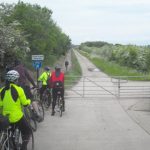 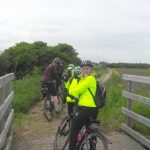 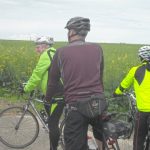 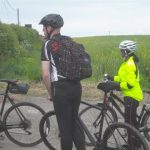 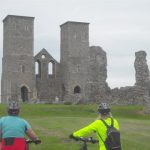 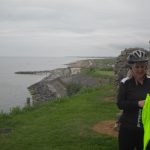 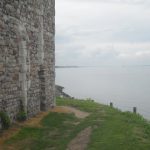 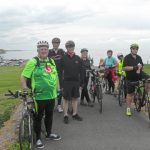 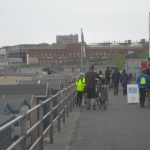 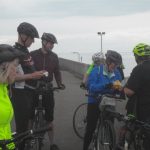 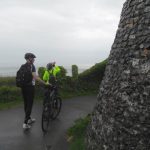 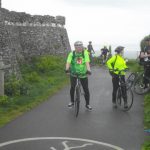 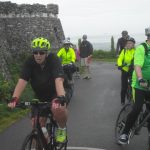 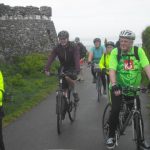 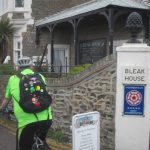 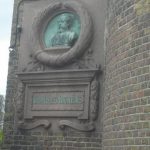 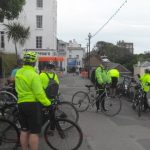 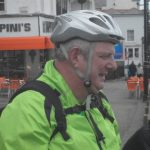 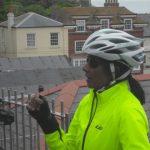 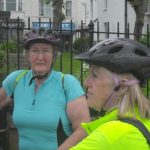 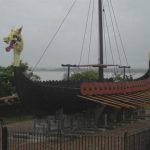 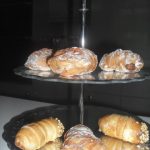