If I wasn’t declared an honorary woman the first time this occurred I am in little doubt that the title is now fully earned I am officially called Joanna. I had two male riders register for my ride both of whom failed to turn up and no women registered and 3 showed up. On Valentine’s Day too. I should be so lucky!

Although I named the ride in honour of St V, it was really just an opportunity to check out the Adam Shepherd route for next Sunday’s Brighton Training Ride 2 (if you have not registered for this ride and would like to come the please click here). At 20 miles it is 5 miles further than the first outing, and it is harder, but not much so.

Anyway, arriving at the meeting point expecting to rendezvous with Danny and Andrew, I find Linda, Karen and Alice awaiting me. Now don’t get me wrong I feel very flattered to have these 3 young women join me for a bike ride; privileged even. But I’m not at all sure how I am going explain this to my wife, let alone their husbands. I have a funny feeling the old honorary woman story isn’t quite going to cut it. 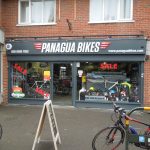 We took a little while getting ourselves sorted out. We visited Panagua bikes to pump a tyre that was misbehaving. So it was nearly 10:45 before we got under way. We made our way uphill all the way to Downe where we stopped for a breather outside the George and Dragon – well known watering hole of the UKIP leader Mr Nigel Farage. We didn’t see him this morning, perhaps he was off canvassing somewhere. There were a group of Paragon Riders here and one of them actually spoke to Alice. Ooooh! 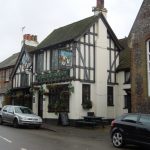 The next section of our ride took us out towards Luxted, still mostly uphill. At Berry’s Hill we met a young couple out for a bike ride and chatted to them. They hadn’t heard of Bromley Cyclists so we told them about the Brighton Ride and invited them to join us for the training ride next Sunday. They seemed interested, particularly when we said that it had been done in the past by riders aged 9-70.

At Brasted Hill we were about half way so I kind of thought we might find the ride more downhill from this point onwards. You guessed it; not so. It seems to be a peculiar feature of Bromley that you can do a circular ride which is uphill all the way – quite remarkable!

In fairness from the Blacksmith’s Arms at Cudham there is a nice downhill bit into the valley but then there is the climb out of the valley on the far side towards Christmas Tree Farm and after Holwood Farm it’s pretty much down all the way home. At this point I decided the riders had been working very hard and thought it appropriate that their performance should be rewarded with a tea and cake stop at the Holwood Farm Coffee Shop at Keston. So this is what we did. Lazing for ½ an hour over tea and a rather nice Lemon Victoria Sponge. But it must be acknowledged that it was not as good as the cakes made by our very own cake maker who was present. Linda your cakes are very special!

Holwood Farm is a popular tea and cake stop amongst the cycling community and they make it very obvious that cyclists are welcome, unlike another farm in the area where cyclists are made to feel unwelcome and which will remain nameless.

Refreshments over we remounted for the last little push back to Hayes where we called our goodbyes and headed for our respective homes.