On my way to the station I met Helena and she asked me how many I was expecting on today’s outing. I said I wouldn’t be surprised if there were 20 although only 8 had registered for the ride on this website.

At Bromley South there was 17 of us and we did think for one awful moment a member of the railway staff was going to be difficult about letting all of us onto one train, anyway he seemed to think better of it and we descended to the platform clutching our return to Birchington-on-Sea Supersaver Tickets. 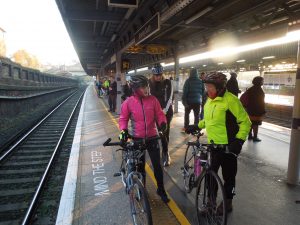 Waiting for the Train at Bromley

On the long journey we chatted amongst ourselves. We spoke to the guard on the train, he was very friendly and helpful. We checked the route and the maps and generally idled away the 1½ hour train-ride to the coast. 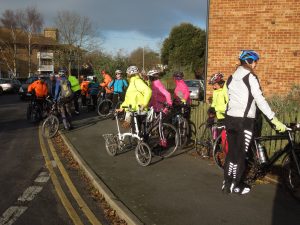 Waiting to Start at Birchington

At Birchington we were joined by 3 more riders and so shortly after 10:15 20 of us set off along the sea-front for our ride. The sky was clear; the sun, low on the horizon, shone its wintery rays which did little to warm us on this cold frosty morning and a tail-wind blew us eastward alongside a high-tide which was quite rough. Occasionally breakers would crash into the seawall sending plumes of spray high into air alongside us. Mercifully we stayed clear of the water and remained dry. 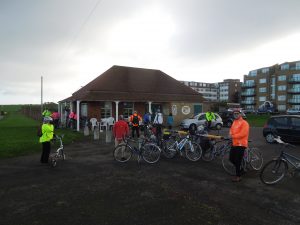 The Cafe at Cliftonville

At 11 o’clock we reached the café at Cliftonville high on the cliffs overlooking Walpole Bay to our left and Palm Bay to the right. The air was wonderfully clear we could see for miles; ships far out at sea were clearly visible and brightly coloured in the sunshine. We gratefully went inside for a hot drink and a warm-up, and what a lovely surprise when Evelyn produced a box of homemade mince pies which she had made for us as a Christmas treat and which the proprietor kindly granted permission for us to consume on his premises. The pies were delicious and Evelyn wished us all a merry Christmas. 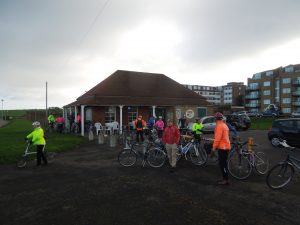 The Cafe at Cliftonville

After half an hour we were sufficiently warm to get going again. We set off around the foreland passing Botany Bay and Joss Bay. There was an opportunity which I missed at Broadstairs to stop at Bleak House which was the template for the Charles Dickens House of that name. However we did stop to admire Dickens House and Museum a little further along. 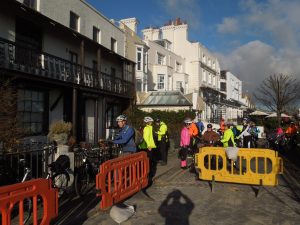 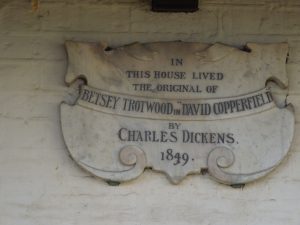 At 12:30 we cycled down the long steep ramp into Ramsgate where the container terminal was looking sadly redundant – a casualty of changes to international pollution laws apparently. It was a little early for lunch but as we always have lunch here we stopped. There are various pubs, cafes and food outlets on the seafront here. Many sat out in the pleasant sunshine – December lunch al fresco; you won’t do that very often in England. 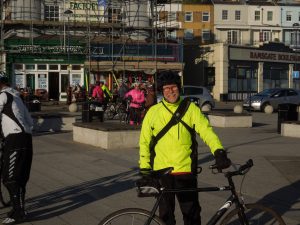 After lunch two riders departed to the station and the remaining 18 set off to our next point of interest – the Viking Longboat at Cliffs End. The boat was ‘wrapped’ in tarpaulin for the winter so wasn’t displaying is best view, but we stopped for a photo opportunity obviously. 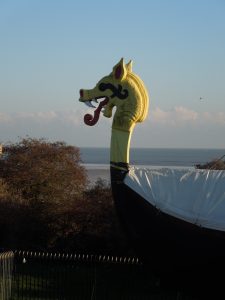 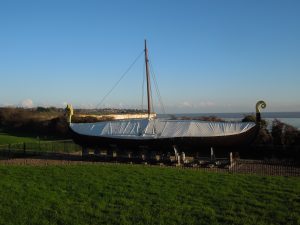 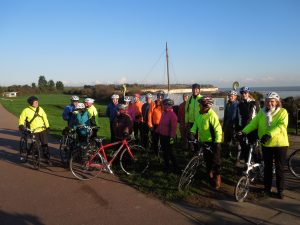 A little further on we reached Pegwell Bay and here turned inland for our cross-country stretch back to Reculver and Birchington. The sun was beginning to dip towards the west and we were pedaling into a cold headwind – not very strong, but noticeable. It was also noticeably cooler as the mid day warmth dissipated in the afternoon shadows. 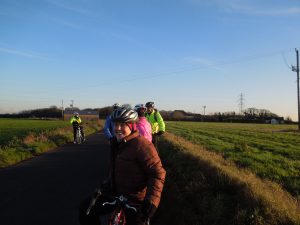 We cycled alongside the now defunct Manston aerodrome – one of the few airstrips in Europe capable of recovering the space-shuttle in the event of an emergency. We passed through Minster and Monkton – pretty East Kent villages. At St Nicholas at Wade 3 riders departed on a cross country short-cut back to Birchington (which is the usual Bromley Cyclists’ route). The rest of the ride pressed on eastwards toward Reculver; its castle ruin was now prominent on the skyline. 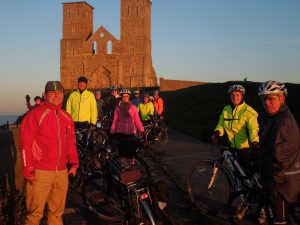 This was an interesting section of the route and completely new to me. The glorious afternoon sun made this part of the ride especially nice. At Reculver we turned east and then followed the beautiful coastal path all the way to Birchington. The now much calmer sea gently lapped along the shoreline to our left. With the wind on our backs again we made great progress and arrived at the station at 4 o’clock. There was just time to grab a nice not drink from a tea-room which was trying to close before the 16:24 to Victoria arrived to take us home.

I thought this was a really special ride. We had lovely riders, lovely weather and a lovely route; although I’d have to confess that my ‘no hills’ description of the ride on this and on the LCC website might be reasonably described as ‘a little misleading’ – but we survived.

I am particularly grateful to Steve Watkin for his support in keeping me on the route today, particularly in the morning where I strayed off-course a couple of times and to Eve, who was the navigator today, for her meticulous ride preparation.