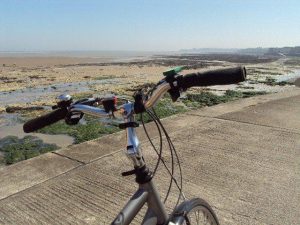 What fabulous weather for our ride today.   We met at 8.30 at Bromley South to catch the train to Birchington on Sea.   Eleven of us set out, so we had to spread ourselves through the front four carriages.  We were joined at Gillingham by Richard which made our number up to 12.  Our ride leader today was Steve, an experienced hand at the Viking Trail and it was lovely to see some new faces on the ride as well as the usual old ones. 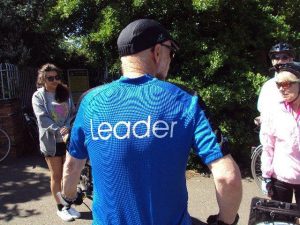 It must have been the good weather, because by the time we had reached Rochester it was standing room only on the train, with everyone heading for the seaside. 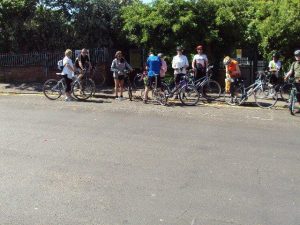 Start of our ride at Birchington on Sea

Once at Birchington on Sea we made our way to the seafront to pick up the Viking Trail and we were soon cycling along the promenade towards Westgate on Sea.   It was jackets on as we headed into a fairly strong headwind and it didn’t feel that warm. 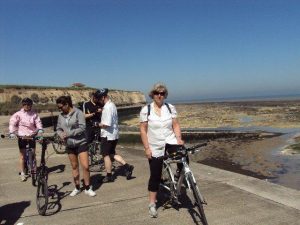 We had a fairly early stop on the top of the cliffs for tea and of course the traditional Bromley Cyclists cake, before continuing on to Botany Bay and Broadstairs, where the beach was absolutely packed. 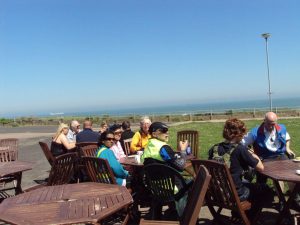 Tea and cakeBusy beach at Broadstairs

We had already planned to stop at Ramsgate for fish and chips and of course an icecream;  it seemed at this stage that we had taken on far more calories than we had burned off! 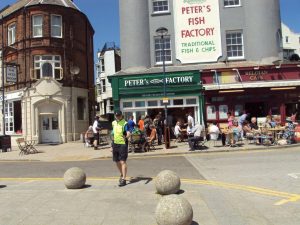 Fish and chips at Ramsgate

Lunch over it was on to Cliffesend and inland towards Minster and St. Nicholas at Wade where we stopped at the pub for a quick drink and to top up our water bottles. 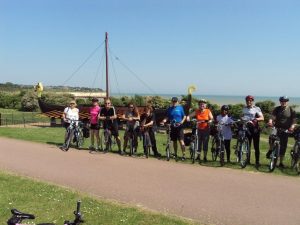 From here we followed a rather bumpy track through some fields, as of course we usually do when Steve W leads a ride, we were even lucky enough to see a Marsh Harrier and Falcon.  Then over the railway track and back on the sea wall for the last few miles back to Birchington and the train.

A full train on the way home, seeing many of the people who had travelled with us in the morning now returning home, many rather sunburned.

A fantastic day in good company and a huge thank you to Steve for organising this ride.  We very much look forward to the next one.