A good old bakers dozen set off on our ride today. We were pleased to welcome some newcomers and of course our regulars. 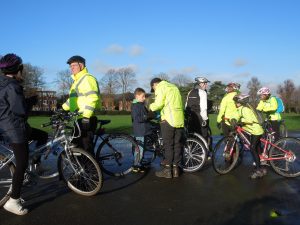 It was a fine winters day, but there was a cold wind. We started off with a puncture which was quickly mended and did not delay us for long.

There was a lot of evidence of recent flooding along the Waterlink Way. The path behind Cator Park School was covered in thick mud where the Pool River had obviously burst its banks.

At the Curly Wurly Bridge we split into two groups, with the more ambitious riders going over the top whilst others used the more sedate route.

At the North end of Norman Road in Deptford/Greenwich there was considerable difficulty gaining access to the Thames-side path where a formerly two way street had been changed to one way before the alternative route had been opened up. This was frustrating but eventually we managed to find an alternative, but not before one of us had attempted to go the wrong way up the one way street in the face of an oncoming police car.

By the time we got to the Old Brewery Cafe we were all quite cold and grateful for a restorative hot drink and a cake.

As we all know the South bound journey to Bromley is uphill all the way, quite gentle but definitely uphill so it was surprising that the return journey seemed easier than the outbound one.

We got back to Cator Park just before 2 o’clock and said our farewells. And we’ll be doing it all again next Sunday so please come and join us!