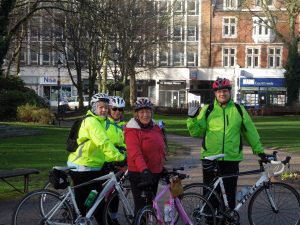 This was shaping up to be a ride free week-end – though not cycling free I hasten to add; there must have been at least 100 children and parents at Bromley  GoRide Racing League yesterday afternoon, and in the most disgusting cycling conditions some very impressive time trialling was on offer. Well done to all those who took part you were very brave and well done to the adults who turned out to help, support and organise in gale force winds and stinging rain showers. Surely this run of bad weather must end soon and we can get some more favourable cycling conditions.

Anyway back to today’s ride. On Friday afternoon I had an email from Eve asking if I was doing a ride on Sunday. There was nothing planned but the forecast looked better than anything we have seen so far this year so it seemed a real shame to let such an opportunity slip.

I took the easy option and reposted last weekends ride along the Waterlink Way. As many of you know I love this ride. I’m sure it is the best cycling route in South East London. 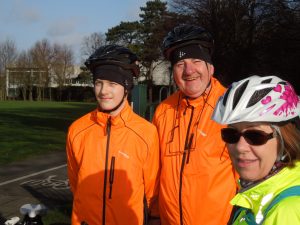 Some of the Riders

At Beckenham Green four of us usefully spent the waiting time fixing Space4cycling signs on our bikes whilst awaiting late arrivals. We were joined by three more riders, so seven of us headed to the second rendezvous point and were ‘buzzed’ by Steve Bunn on that other form of two wheeled transport – a motor cycle. Be safe Steve!!

We picked up two further riders at the Cator Park RV and soon after half past ten we were off under glorious skies and bright cheerful sunshine.

We made excellent time to Catford Bridge where we paused to contemplate the proposed closure of our beloved route for the duration of a major house building project on the site of the old Catford Dog Track. This project has been a long time in the planning but we understand that within weeks the work will get under way. There is an appalling proposal to implement a diversion of the Waterlink Way along Ravensbourne Park. Lewisham Cyclists under the leadership or our good friend Jane Davies have challenged the application to close Adenmore Road and we hope that a more agreeable compromise can be found.

Pressing onwards we decided against the curly-wurly bridge but continued along Malyons Road which runs parallel to the cycle path through the park behind Lewisham Hospital.

Arriving at Cutty Sark Gardens the riders were all in fine form and ready for the little add on which I had planned for the event. We piled into the foot-tunnel lift and walked our bikes to the northern shore where we remounted and continued our ride on the Isle of Dogs to the Hub- bub cafe where we enjoyed a restorative cup of tea or coffee and for the greedy ones a slice of homemade chocolate brownie – yum-yum; well done chef. 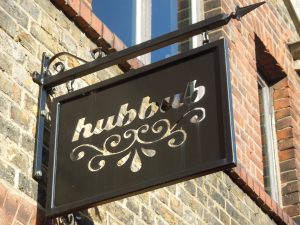 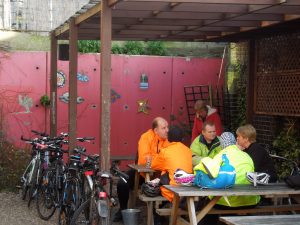 Suitably restored we saddled up for the return journey, Chris who had started late and caught us up decided that he would continue to London and perhaps even try to find the cycling route home from there, we gave him some maps and wished him well. We paused at the Cutty Sark for a picture and then headed back towards Bromley. In Deptford we paused by the Birds nest Pub where they have a London bus parked as a permanent seating area and enquired whether there was somewhere to park our bikes if we led a Friday the thirteenth ride here. The licencee assured us that there was usable space at the back where we could park bikes, so we shall be organising this in the future. Watch this site for details. 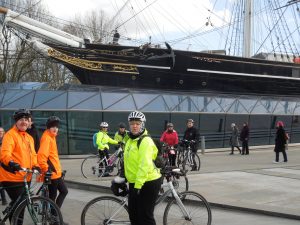 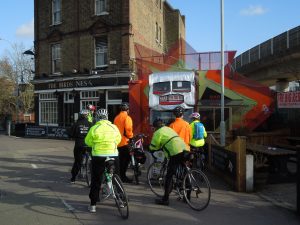 This was a lovely ride and very well attended considering it was very last minute, the riders were great company and we began to notice some budding ride leaders beginning to develop – Alice.