We met as usual at Bromley South and although it had been a beautiful hot sunny day you could tell autumn was on the way. Jackets on we set off at a rather brisk pace, our ride leader tonight was Julian, one of our newer members.

Through the back streets of Hayes we went, our destination tonight was The Blacksmiths Arms, Cudham, and as we went down Fox Lane at Keston and into Jackass Lane, we knew there would soon be a nice hill up to the church at Keston. Then it was on to Downe, by now it was dark, which was a reminder that winter was on the way.

From Downe it was more uphill until we arrived at Jail Lane at the back of Biggin Hill. Nearly there said Julian, only one more small hill before the pub.

We arrived at the same time as Spencer in his car, he had just come from the cyclocross at Herne Hill, although he didn’t look anywhere near as worn out as we did. We settled into a corner in the pub and were soon told that the Doombar had run out, and Sticky had only been there for 30 minute. Spencer introduced us to a new cyclist, Tim, who joined us for the rest of the evening and we heard some of the tales from the Charity Weekend Ride. 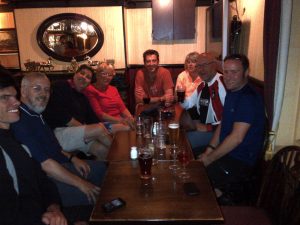 A nice evening in good company before the lightweights started to leave, Spencer, Howard, Sticky and Linda (GTGF) Rampling, (only joking, I know some people have to get up for work in the morning).

The rest of us stayed for another half an hour or so and then it was jackets on the for very cold downhill along Cudham Lane and back to Orpington. A lovely evening and thank you to Julian for planning the route and leading the ride.