Eight of us met at Bromley South and after a beautiful sunny day we were a little disappointed with the rather cloudy start to our ride, especially when we felt the first spots of rain.

However, the forecast was ‘no rain’ so we set off up to Petts Wood, our destination tonight the village of Shoreham.  The two Steve’s had ventured out on their recumbents and the pace was fairly brisk as we rode along chatting, catching up on everyones news from the past week.   We welcomed our new rider Paul who Mel had brought along, no John tonight, working late again and still no Spencer who really has had manflu since about January.

We got as far as Green Street Green, the rain falling a little heavier now and the decision was made to shorten our ride to The Cock at Halstead.  A few of the braver souls went up the steeper route to the pub, while the rest of us chose the easier hill.

We did in fact ride past the latest bike tag, but no-one seemed to notice, or maybe they did and they’re all rushing back today to take their photographs.

The pub was fairly quiet, so we settled ourselves around a large table in the bar for the rest of the evening, 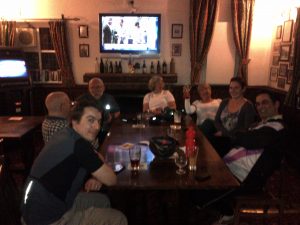 We were all now looking forward to the lovely downhill ride home, rather than the very hilly one we would have had if we had made it to Shoreham.

A good evening was had by all, hope to see a few more of you next week.