This evening the ride was up to the Dulwich Woodhouse, a Young’s pub under the shadow of the iconic Crystal Palace aerial mast and nestled on the edges of the historic Dulwich Wood high above Sydenham Hill and Dulwich Village. This was a new destination for us and a contrast to our usual more rural wanders in or near the southern sector of the borough. 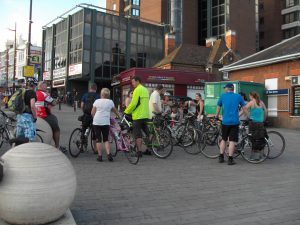 Seventeen of us gathered in lovely summer evening sunshine. In the absence of someone competent I was asked to lead and the only routes I knew with confidence was straight up either Crystal Palace Park Road or Anerley Hill. I chose Anerley Hill with its numerous false crests and flats; I wasn’t very popular. We took a long breather at the top outside the new cycling establishment called Cadence, it was closed so we couldn’t go inside. I thought it looked a modern and trendy ‘Look Mum No Hands’. 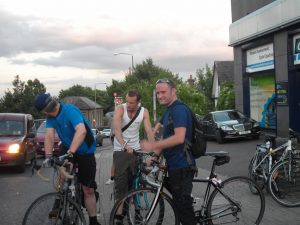 At the top of Anerley Hill

Once we had rested awhile it was a quick ride along Crystal Palace Parade to the Dulwich Woodhouse where we locked up the bikes in the garden and made ourselves comfortable. A rather poorly attended quiz night was under way. Tessa on her smart new bike which she had just collected and was out riding for the first time was awaiting our arrival.

This pub opened in the 1880’s and has been a regular entry in the CAMRA Good Beer Guide but it is not the establishment it once was. Gone is the welcoming and homely public bar, replaced by a fancy dining room. The worn floor rugs have been replaced by trendy wall hangings. Rush dining place mats and scented candles have taken the place of cardboard beer mats. Pork scratchin’s have given way to sun dried tomato crisps. The traditional array of Young’s beers have been supplemented with a range of ‘continental lagers’ and fine wines and at a fine price (a glass of red: £7.45 ouch!). The building was originally a private dwelling built in the mid 19th century by Sir Joseph Paxton, whose most famous work was the ‘Crystal Palace.’ 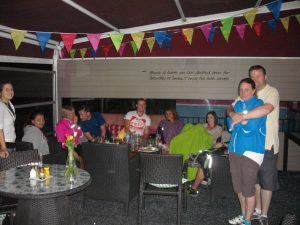 The Dulwich Woodhouse – the conservatory

Our younger members retired to the conservatory whilst in the garden the inaugural meeting of the Forty-niners Section was held. There are five founder members of this elite syndicate. To qualify for membership you must be a Bromley Cyclist and over the age of forty-nine. The main topic of conversation was “who else amongst Bromley Cyclists qualified for our exclusive club.” I shall not name names but there are a few! The principal benefit of membership is the right to moan; about young people, old people, the National Health Service, the government, the world and not necessarily in that order.

We suddenly realised that we were six in number not five; “a rat!” shrieked Eve pulling her knees up to her chin. Sure enough lurking in the shade by the bikes was a little (not so little actually) furry friend which promptly darted off into the bushes. Further expensive rounds were ordered and consumed and once again we became aware of unwanted company by the bikes in the shadows. Our ratty friend nipped off quick when we went to investigate.

The closing time bell heralded our departure. One of the benefits of climbing to the top of a hill is the joy of the descent. We zoomed down the well lit Crystal palace Park Road into Penge and then Beckenham. Just before Shortlands I called goodnight and turned into home as the peloton disappeared towards Bromley and beyond.

It was a lovely evening, and nice to visit the north of the borough, but the Dulwich Woodhouse has changed and moved on so we need to find another northern destination!