On a balmy summer’s evening fifteen of us cycled out to Swanley to visit the Lamb pub in the village.

This is one of Eve’s favourite pubs. Spencer, back from his adventures in Holland, led. We did a couple of on route pick-ups; Petts Wood and BCR Bikes. 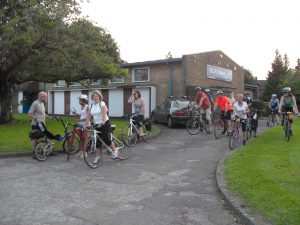 There were fifteen of us, including 5 girls

It was a great out turn-out tonight, particularly by the girls. It was nice to welcome Julian who was out with us for the first time. The only downside to this ride was a couple of punctures – both rear wheelers.

Ray and Margaret were our hosts at The Lamb. We were made most welcome and were invited back any time (and I don’t suppose it will be too long before that offer is taken up). Ray came and spoke to us in the garden where we were all sitting out and said in future if we gave him a call before we arrived he would lay on some food for us. 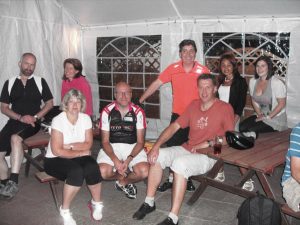 In the garden of The Lamb, Swanley Village

About half an hour later word came from the bar that there were some trays of snacks indoors if we would like to come in and help ourselves; and we did.

Thanks to Ray and Margaret for their hospitality. Thanks to Bromley Cyclists for setting the ride up and to Spencer for leading it. Thanks to everyone else for being such lovely company.

Distance this evening: about 22 miles