It had poured with rain throughout the night. The ground was soaking, the roads puddled with huge lakes of standing water. At 9 am the deluge had finally stopped, but everything was dripping as we gathered under a grey lowering sky at Orpington Station. Today’s ride leader was Steve and he confirmed that in spite of the conditions the forecast was good and we were going. We were an unlucky thirteen as we, but this was corrected when we were joined by Tessa after a mile. There were some old hands and some new faces. 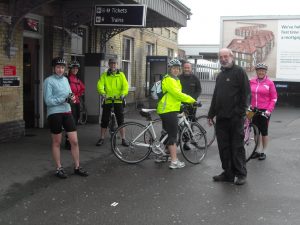 We made good time through the gentle undulations of Swanley, Hextable and Green Street Green. At Northfleet we could smell the coffee and were ready for some victuals. We pulled into the ever popular Promenade Cafe overlooking the Thames Estuary at Gravesend, the weather had brightened and it was warm so we sat outside. 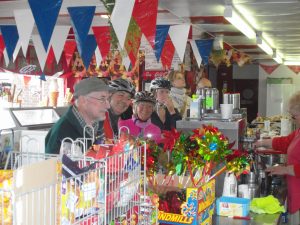 At Gravesend we joined National Cycle Network (NCN) Route 1 passing the Police Firearms Training Centre and onto the gravel track surface across the marshes towards Rochester. We had a short stop for a mechanical overlooking the hulk of a decaying Soviet Submarine, if you look closely you can just about make it out over Toni’s right shoulder in the picture. Departing Rochester the team got briefly separated, but were soon reunited. 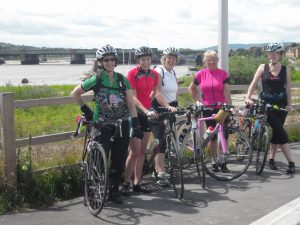 As we rode towards Faversham the skies darkened and became threatening, but apart from a few spots the rain held off. We arrived in Sittingbourne at 2pm and stopped for lunch, a choice of McD, KFC or Pizza Hut. You’ve got half an hour said Steve – an hour later we were back on the road with about 20 miles left to go. The sun came out again giving us a lovely ride along the dyke passing the houseboats moored in Conyer Creek. 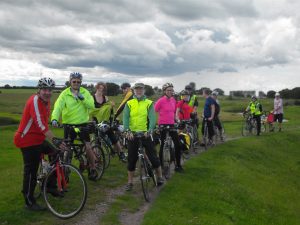 A puncture for Nev just outside Deerton Natural Burial Ground gave us a breather. Steve W commented that he would like to be buried in a natural burial ground. Spencer told him that it could be arranged and much sooner than he expected. 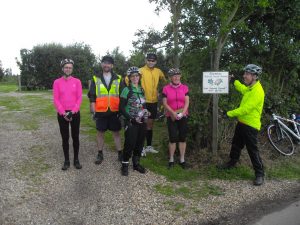 Linda had her first ever puncture a little further on, but by now the sun was blazing and nothing could dampen our spirits.

We arrived in Whitstable bedecked in jubilee bunting (the town not us) and made our way to the pretty harbour. Unfortunately with no R in the month we could not sample the oysters and so made do with a celebratory ice-cream. The consensus was that, for most, we had had enough fun for the day. Bob and his daughter Sarah decided they would continue on the Crab and Winkle Way as far as Canterbury and we bade them farewell. 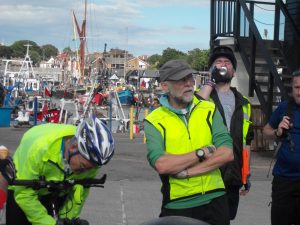 Whitstable – the end of our ride

Some went with Steve to the pub for a libation or three. Spencer and Eve led the remainder to the station for the 18.08 to London. At Bromley South we waved goodbye to Toni, said goodbye to each other and went our separate ways for a well-deserved hot bath and dinner.

Thanks to Steve for a brilliant ride. And thanks to everyone else for being lovely company.

More Pictures at the Bromleycyclists Group page on Yahoo