The final destination of this ride was not known until we actually arrived as it was listed as Sticky’s Christmas Surprise. A good turnout at Bromley South bearing in mind it was -2 when we arrived. There were 11 of us in total, so well done to all the attendees. 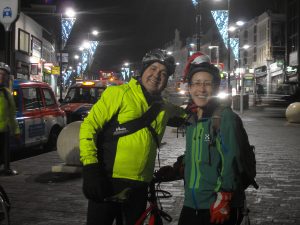 Christmas hats were in abundance as everyone seemed to be entering into the spirit of the occasion.

The problem with a surprise ride and unknown venue is getting the balance right between giving some information in advance but not too much so as to give it away. It was successful, well sort of!

So we ventured off round the back of the Taxi Rank and Sticky led us on a bit of a loop only to end up back at The Glades in Bromley. After securing the bikes we ventured inside and met Jackie! 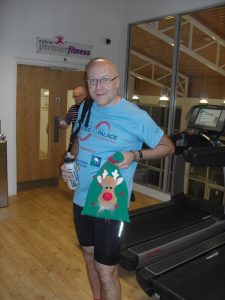 Jackie was to be our spin instructor for the evening. The look of fear started to appear on the face of some (no names Mr Watkins).

Not all the attendees were suitably attired for a spin class and chose to make a quick exit…..which was understandable.

So we managed a 35 minute spin class with lots of effort being made by the group to the accompaniment of some rather off the wall music choices, but good spin music I am told! 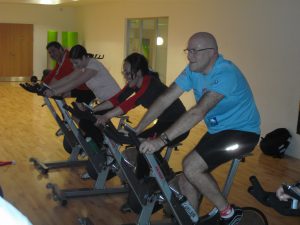 In recognition of this, chocolate covered Reindeer and Santa’s were dispensed.

We retired to the Bar in The Glades, which to be honest was pretty good and located next to the recently installed 10pin bowling alley, which looks very professional and will be considered as a possible end of cycle venue next year.

Finally, back outside and it was now -3 we all made our way back home to our warm houses.

Just leaves me to thank Jackie at The Glades and the team for giving it a shot as I know some had never done a spin class before……..and some may never do another one again! A special mention for Stephen ‘the tomato’ Hardy who took to spinning like a duck to water.