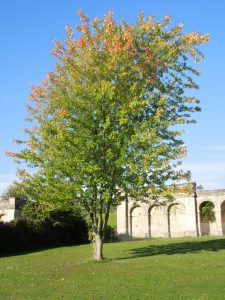 There is news on the jungle drums that there is an interest in extending the Quietway known as the Southwark Spine from its current terminating point on Crystal Palace Parade to somewhere further south and perhaps even make it link up with South Norwood Country Park. This is but rumour at the moment but Bromley Cyclists don’t wish to be caught on the hop should Sustrans or even the council come knocking with a plan.

With this in mind Tracey led a brilliant route which had us negotiating the hitherto undiscovered narrow footpaths linking Eden Park with South Norwood avoiding the hideous junction at Elmer’s End. This route is really the holy grail of navigating from Bromley towards Croydon.

One thing that became apparent on our ride was that the lower slopes of Crystal Palace are entirely manageable for most cyclists and if a zig zag low gradient route could be worked out through the park then this could be quite a pleasant link up with our borough.

Staying to the South of Crystal Palace we made our way to Sydenham and then then to Lower Sydenham where we got a bit confused with the complicated road layout and ended up going round the gyratory, which was a bit hairy.

In Fambridge Close we came upon three youngsters gathered around a woman lying in the roadway. They did not know her and had just found her there. We decided to call an ambulance which one of the youths did for us and he then carefully relayed our first aider findings to the ambulance control whilst they sorted out a response.

Once the ambulance was on scene the medics took charge and we resumed our ride, as it became clear the victim more suffering from some sort of distress rather than a physical injury.

We ended up after 14 miles of cycling at the Belgo Bar overlooking the gardens at the rear of The Glades. The pub was quiet (until we arrived). By this time our numbers has swollen to ten so we spent a pleasant hour of Banter and Beer (or in my case coffee).