Last night the ride out was very pleasant in spite of the continuing poor weather. The cold spell just seems to go on and on. This was first ride of the year in British Summer Time. When we reached Orpington it was snowing!

Six of us gathered at Bromley South. It was still daylight but clouds were low and threatening; most uninspiring. There was a lot of chat about the current tag as we waited for the late arrivals. We were delighted to be joined by James’ wife Emma, James having been confined to barracks to look after their baby. We look forward to a time hopefully not far into the future when Emma and James can both join us for a ride. Baby too if possible, how cool would that be?

Paul told us that Steve would be joining us at the pub as he had a disaster with his bike as he had been getting ready to come out.

Having hung on for a few extra minutes we were beginning to get cold so we set off and as we did so we were delighted to be joined by Tim on his new rubbers.

Not really too sure who was the ride leader last night, it was kind of organic and seemed to vary as we went along; all very eclectic, but great fun.

We rode out to Hayes and then along Barnet Wood Road passing the Two Doves. Having crossed to the East side of the A21 we cycled through FarnboroughPark, and here we became aware of the snow flurries, so we made a bee-line for the pub. Unfortunately one of our number got a little bit ahead of us and Paul had to go and rein her back in. 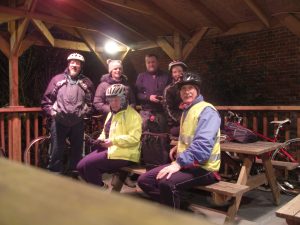 The Chelsfield Pub was quiet and we had a nice table with seating to ourselves. Steve H joined us as promised. 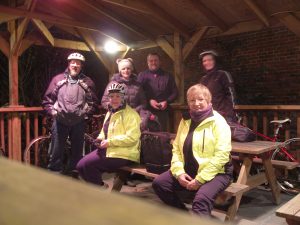 Linda the sneaky tinker then revealed that before joining us she had gone and got the newest tag at the Police Sports Club and now had set a new one. Well done Linda, we were all mystified by the new picture. We stayed and had a couple of drinks before the ‘North of the Borough contingent’ decided that it was time to head for home. We definitely wanted to deliver Emma home safely so that James will let her join us again.

It was lovely evening out so thanks to whoever led, the only thing I can be sure of ‘it wasn’t me.’

My round trip was about 15 miles.