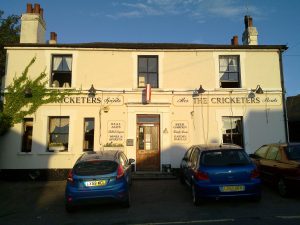 A very well attended weekly wander resulted in a dozen of us whiling away a very pleasant couple of hours in the Cricketers in Orpington.

The wander was delayed departing from Bromley awaiting the arrival of riders who had been in a meeting with other volunteer groups publicising our activities to members of the business community. Once we were gathered we soon got under way. The ride was a bit stop start because of a ‘mechanicals,’ nothing serious but just enough to slow us down whilst problems were resolved.

Following the back street route parallel to the A21 through the Chatterton Village, Princess Plain and Farnborough Park we made our way to Tugmutton Common at which point my local knowledge failed. Eve led us through some quiet residential streets and eventually we popped out near Orpington Station where we used the much reported nasty tunnel to cross underneath the station and then through further residential streets until we reached the Cricketers, tucked away on a hillside in Chislehurst Road on the edge of Broomhill Common. Whatever else is played on Broomhill Common I am pretty sure it doesn’t host many cricket matches, downhill skiing maybe; it’s probably steep enough to host the world bob-sleigh championships (bit short though).

At the pub there was just one member of staff on duty who we later learned was the licensee’s daughter who was holding the fort for the evening. She was relaxing with a couple of customers on our arrival and as is customary here was pleased to open the side gate so we could park our bikes securely in the back yard.

After ordering drinks we retired to a quieter corner underneath the well filled trophy cabinet to consider the serious business of whether The Cricketers in Orpington is the Bromley Cyclist’s March Pub of the Month. The last time we were here, which wasn’t all that long ago, we were able to sit in a rather comfortable back room unfortunately it had been set up ready for a funeral reception so was off limits this evening. The pub is comfortable, the drinks were good and the service friendly. The television was unobtrusive and later someone switched it off altogether. So a very favourable evening all round.

We were joined by more members of the team who had been attending other meetings and soon we grew to a crowd of twelve. Coupled with the fact that another large group of customers dropped in a little bit later on made for a very busy evening for the landlords daughter and she would probably have been grateful for an assistant. Having said that she did very well and attended to our comfort with calm efficiency.

We stayed until closing time and I think we can report that we all had a thoroughly enjoyable evening. It might even be said that some enjoyed it a little too much and may regret it in the morning!

To find out if the Cricketers is our Pub of the Month you will need to check back in April, but it has scored well.