On my arrival at Bromley South I found seven cyclists waiting for me. I was late having been delayed in the office. Five of the riders were the usual regulars, we were pleased to see Emma had managed to come and join us again leaving James to attend to parenting duties, and in particular we were delighted to welcome Afet who we haven’t seen for a long time.

I had cycled down from Central London against a fierce headwind so I kept everyone waiting (for which I might add I got a serious flea in my ear later in the pub – Emma!!) So I was absolutely delighted that as I rolled into the meeting point ride leader Eve called for everyone to mount up and we were off. Not even time to put my foot down let alone draw breath.

I don’t usually report on negative stuff on our rides (there’s too much good stuff to write about) but the incident with the occupants of a Mini Cooper at the junction with Widmore Road was so bizarre it was almost tragic. Having cycled round the back of the Glades we joined the Kentish Way westbound and then filtered to the offside lane outside the old Bromley Police Station setting up for the right turn into Widmore. The above mentioned Mini Cooper containing a bunch of youngsters was waiting at the pole position at the lights which were at red.

We cycled up and passed around the mini and into the Advanced Stop Line (ASL) area and took up position ready to turn right when the lights changed. There then commenced a deafening cacophony of hollerin’ and yellin’ and tooting of car horn. The lights changed to green and we manoeuvred around the corner into Widmore with the hairy lairy’s still givin’ it large on the horn and as they swung out to overtake the loudest and mouthiest young lady in the front passenger seat threw a bottle at us. Fortunately it was plastic and did no damage; all most peculiar.

Anyway that wasn’t going to be allowed to spoil our ride and we just carried on. After Sundridge Park we took the quiet route through Chinbrook Meadow where we found and in my case climbed through some of the most extreme cycle pinch gates that I have ever encountered. Quite what had been going on this little park to justify the installation of such extreme infra-structure I dread to contemplate. There is no way that a tricycle would get through or a bike towing a cargo trailer. Very strange. I shall send this report to Lewisham Cyclists for a comment. 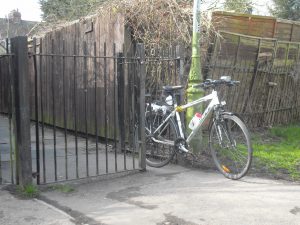 I have long been aware of Delhi belly but at Grove Park Howard just back from a Spanish holiday (and looking revoltingly sun-tanned) was struck down with the Iberian equivalent and decided to head home. We were sorry to see Howard depart.

The Chinbrook cut through led us across the South Circular and then (very briefly) via Manor Park up along the back route into Blackheath and we soon found ourselves locking up outside and piling into the Hare and Billet pub. We were joined by Steve W who had ridden up on his motor-bike. 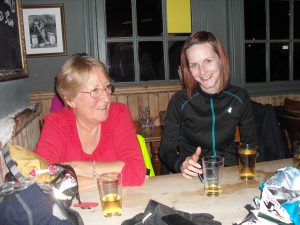 The pub has undergone a makeover since I was last here. They have tried to keep the floor-boards and sawdust charm of old but make it a modern trendy version. I don’t think I approve. It was very noisy and very expensive (£1.50 for a packet of peanuts, £4.50 for a half of cider. Ouch!!) 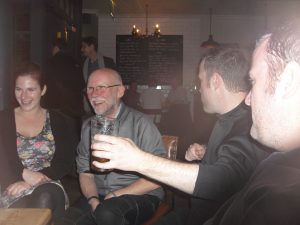 More Happy Cyclists (and a motor-cyclist)

We made ourselves comfortable and whiled the time away and I have to say I was taken by surprise when the bell for last orders sounded. So perhaps the pub was better than I have portrayed because I for one wasn’t aware of the time passing.

We cycled back along the same route. We had all given Eve a serious leg pulling about how hilly her route was and that it would be a hard ride home – to be fair it was easier on the route home than on the way up. Perhaps the wind had changed or dropped.

So in summary a lovely cycle-ride of about 15 miles. Not quite a summer ride but it stayed light almost to the pub so it didn’t feel like it was winter anyway