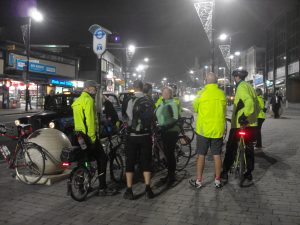 A first for Bromley Cyclists, same pub two weeks running.   Last week the weather was awful so the ride was abandoned and we went straight to the pub.

This week the weather was fine and there was a good turnout at Bromley South for the start of Nev’s ride.  We set off at a reasonable pace heading for Hayes and then up to Keston.   Quite a mild evening we soon warmed up and it wasn’t long before the layers started coming off.

From Keston we found a nice little path through the woods (much to the delight of Steve Watkin), although from some of the comments as we slid along the path I think at times it was a little much for Steve too.   The lightweights of the group chose to take the road route instead and met us at the exit of our path along the A21.   Unfortunately John’s lights were not great and he ended up walking along the path and then headed for home.

Once on the A21 we headed for Green Street Green and then up the hill past Chelsfield Station and on to Court Road.   Once in Chelsfield Village we enjoyed a lovely couple of miles riding down Skibbs Lane with a wonderful view over Orpington and the surrounding area.

Just one big hill left said Nev as we made our way to St. Mary Cray and then up Leesons HIll to the Chislehurst road.   Nearly there now said Nev as we cycled along the last bit and down to the Imperial Arms.   Tim left us here and the rest of us made our way to the pub, some of the group even took part in the quiz night.

A pleasant evening at the end of our 16 mile ride, thanks to Nev for planning the route and leading this ride.