As the seven of us awaited late arrivals at our usual meeting point we were joined by a local legend on a most amazing recumbent bicycle. One Andrew Alsop was passing through on his commute home from the further reaches of West London and spotting us he pulled over for a chat. This is the chap who has ridden to Edinburgh and back. A more recent exploit was a visit to his parents in Cornwall, a ride of something over 18 hours and having completed the visit rode all the way back again. We were greatly honoured to be even acknowledged by this man/machine. 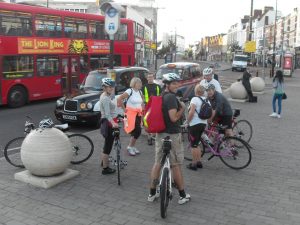 We said good-bye to Andrew and Spencer led us out of Bromley Centre and straight down the A21 over Bromley Common and past the bus depot at Locksbottom. There are electronic barriers at the entrance to Farnborough Park to prevent traffic using it as a cut through. On a bike however you just ride around them (which we did) and entered one of the most exclusive housing estates of the borough if not the whole of London. There are some magnificent properties with beautifully manicured gardens and lawns here. Loadsa money!

Dodging the barrier at the further end of the estate we passed behind the Princess Royal Hospital before crossing the A21 and dropping down to High Elms. From High Elms we rode up the very long hill to Downe village, and then continued uphill all the way to the pub. We were passed by a large group of mtb’ers on their evening out. We challenged them to a race but they didn’t want to know; something like that anyway. It was dark by the time we arrived at about 9 o’clock; the first real sign that summer is passing (what summer). The main bar had a few customers, but in the empty back bar there was a long table just right for us so we ordered drinks and snacks and sat. 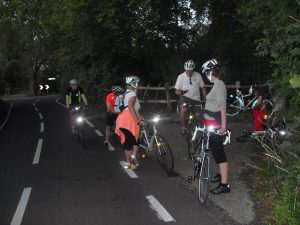 A pause on the hill

At our monthly meeting on Monday it had been decided that we would try a new method of setting up destinations for the Wednesday Weekly Wander; regular attenders would be given an opportunity to nominate a pub they would like to take everyone to and then have the opportunity, if they wished to lead the ride. In order to get next weeks ride organised Eve set up an alphabetical list. Sticky was top of the list and said he would let us know when he had decided, when yours truly got in quick and invited everyone to come to The Rye in Peckham Rye next Wednesday. So that’s what we’re going to do and I shall lead.

Spencer asked us to nominate any one way streets in the borough which we would like to have changed to two way for cyclists. There were one or two suggestions. They are to be notified to the LCC.

Nev joined us having arrived in something called a car – is this guy a real cyclist I have to ask? 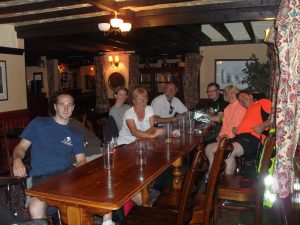 In the Old Jail House

Dear readers, last night history was made when one of our group christened Andy Alsop’s recumbent bicycle.

There are some weird ways in which words enter the lexicon. There are many word uses which seem strange, the origins being lost in the mists of time. One day, many years from now, the future world of cycling will consider how and when a recumbent bicycle became known as a ‘Cumberland!’ and those of us who were on last nights WWW on this very special occasion will know the truth: ‘cos we wuz there’. I leave it to you to ponder this strange twist of word use. But from this day forward the word for the recumbent bike amongst Bromley Cyclists is the CUMBERLAND. Steve Watkin please be warned: you ride a sausage.

I left with Linda and Tessa at about 10 o’clock and we had a lovely long run down into West Wickham where Tessa and I left Linda. I left Tessa at Eden Park and got indoors just after eleven.

It was a nice ride out, so thanks to everyone. See you all next week for my urban ride!!