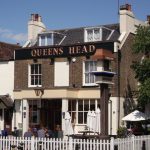 Eve was our ride leader for last night’s wander. Six of us attended and soon after 7.30 we set off through the back doubles to Chatterton Road and then acroos Magpie Hall Lane to Princess Plain. Following the footpaths with our lights on full power in the darkness we crossed the park and then followed the side roads to Petts Wood and to the new multi-level car park at Orpington Station which looks very bright and inviting. I would think that the added car parking capacity at this station contributes significantly to easing congestion in central London and from a TfL view point it is a triumph. We thought it might have also addressed the borough’s obesity issue if they had given at least some of the space over to cycling facilities.

Following the road at ground level to the back of the car park there is a tunnel underneath the railway lines to the northbound side and from here there is a footpath which could and should be made into a shared used pedestrian and cycling resource, thereby enabling a quiet route from the station to the High Street along Knoll Rise.

But the foot tunnel; Oh my goodness! This sleazy; filthy; broken glass strewn; graffiti daubed; urine puddled passageway makes a third world brothel look quite inviting. The paths leading to and from the tunnel are degraded and overgrown to the point that they are no longer really recognisable as thoroughfares. The thought that the car park development could have happened so close by, without the relatively small amount of work required to upgrade this path and tunnel being undertaken, is mind boggling.

Moving onwards we made our way to back through Petts Wood and soon found ourselves on the rather nasty road to Chislehurst. Traffic last night along this route was particularly well behaved with drivers crawling behind our peloton for quite long distances without becoming nasty or intimidating. So well done drivers in Chislehurst/Petts Wood!!

And so we reached the Queen’s Head in Chilsehurst High Street which is an Ember Inn. We locked our bikes up in the garden and made our way indoors for some well-earned refreshments and to consider whether this might be Bromley Cyclists’ February 2015 pub of the month.

The selection of beers was good and the pub was clean and pleasant the staff were friendly and later on kindly served our coffees at our table. We sat by a blazing fire to discuss all things cycling and to mull over the pros and cons of the pub. You will have to check back to the site after our next monthly meeting to see if the Queen’s Head is Pub of the Month.

We left at closing time. And separated to make our weary ways home.

It was another great wander and a lovely route (despite the ghastly tunnel) led by Eve.