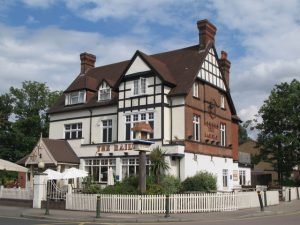 There were seven riders at Bromley South. There should have been eight but Eve was delayed so at 7.45 we somewhat hesitantly set off without her.

John was leader this evening and we were headed for the Railway in West Wickham. This seems to be a popular pub with us and we visit quite often.

John led out through Bromley North and then across the A21 and down Coniston Road towards Downham and Beckenham Place Park. Instead of trying to get through the park which has proved less than successful in the past John led along Brangbourne Rd then through the golf course and down Braeside (nice down hill stretch).

We then cut through the northern end of Beckenham to the extension of the Waterlink Way past the Churchfielsd refuse tip where we hope one of our Space for Cycling ‘Asks’ will soon be implemented and so into South Norwood Country Park.

It was dark but we found our way through without too much difficulty, we bounced and rattled over the cobblestones into the back streets of South Norwood itself before snaking around the Bethlem to the pub. Eve was waiting in the doorway and John received a good old ear-bashing for not waiting tut-tut. We had probably missed Eve at Bromley South by no more than a couple of minuites

The Railway was packed, but we managed to find a table and make ourselves comfortable. We set about deciding whether the Railway was going to be good enough to be the Pub of the Month for April. As I have said above, we a re frequent visitors to the Railway, so they must be getting something right. It scored well but you will have to check back to see if it did well enough.

Later we were joined by Tessa who had been up in London and had come on the train so it was a thoroughly sociable evening and much enjoyed by all. Going home time wasn’t so good though. It was raining at 11 pm as we said our good-byes so we all got a good soaking on the way home.