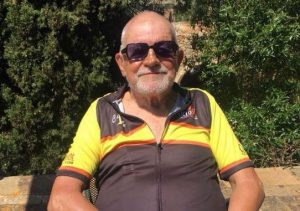 Following the reports of the tragic death of South East London Cycling Campaigner and all round legend Bryan ‘The Hat’ Stout I felt that our ride tonight ought to be some sort of tribute to this fallen hero of the cycling world. I did not know Bryan well but he was a member of Bromley Cyclists, he was a Facebook friend and came to our meetings. He was a regular Facebook contributor to our Bromley Cyclist Group Page and his comments were always intelligent, polite and well-made. Bryan died in Mallorca where he was on a cycling vacation, his final report made just hours before he was taken from us described how he was enjoying the sunshine and warm climate. Good-bye old friend. May the cardinal winds be ever at your back and carry you steadily under an azure sky on a smooth path to that great velodrome above.

The best I could come up with is that as Bryan was president of Catford CC, we should cycle through Catford tonight.

There were some tired legs on our ride this evening. One rider had been out in the Kent countryside and had cycled up Magpie Hollow and some other Kent mega hills too, so a gentler ride was called for.

We headed to Catford on the quiet roads keeping to the East of the A21 which we crossed just north of the Catford gyratory. This was a lovely downhill freewheel for most of the way and we kept a leisurely pace. At Ladywell Fields we crossed the curly-wurly and headed up towards Brockley where we turned towards Sydenham and Penge. This was all on the quieter routes so was really pleasant in the evening twilight.

We arrived at the Railway at about 9.15 having cycled something just over 14 miles. It was generally agreed that this had been a good route and a nice ride.

In the pub we were joined by the terrible twins who never seem to make it to join the ride but usually manage the alcohol part of the event; so now were eight. Four women and four men of which one was Kevin on his first wander with us. Kevin came on the Adult cycling course ride to Greenwich with his wife Janice and he hopes to encourage Janice to join our wanders too.

We spent an enjoyable hour or so in the Railway nattering, mainly about Bryan and then began to head our separate ways.

I have since learned that one rider had come out without the keys to her bike lock so her journey home was less than straightforward but I believe a friend came to the rescue so she made it home eventually.

If you have yet to come out on one of our wanders this is the time of year to make a special effort. Because we have longer evenings the rides seem to be that bit more special. So come on, why not come and join us?