You really couldn’t moan about a poor turnout this evening. It was witheringly cold. At Bromley South we were four Steve W, Mel, me and we were joined by Katherine (hope that is spelled correctly) who was out with us for the first time to get some miles in before she does a 280 mile ride in aid of McMillan in June. So a very warm welcome to Katherine. 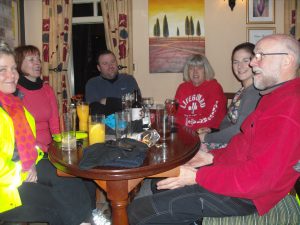 Spencer was still poorly, Eve was feeling under the weather, Steve H was writing a letter? Sticky was in Nando’s with his son.

We did not need a lot of persuasion from ride leader Steve that we should head straight to the pub – The Railway at West Wickham.

We were in the bar soon after eight o’clock and were joined by Lindsey, who was expecting to have had Vicky with her but V had been delayed in London following the helicopter crash at Vauxhall. Linda was also not feeling well but joined us for a drink. She could hardly talk. We chatted and had a couple of rounds. The main topic of conversation, apart from Steve Watkin’s vest was the coming camping trip. Please have a look at our listed events on the home page and see if it is something you would be interested in.

I for one never actually warmed up in the pub. It was just so cold so when it was suggested at 10 o’clock that it was time to go it certainly suited me well enough.

We called our goodnights and headed onto the frozen roads.