As we gathered for our Wonderful Wednesday Weekly Wander I found myself wondering when the weather would really begin to be spring-like. The current cold spell bringing icy winds from the North Pole seems to have lasted for most of February and now we’re nearly half way through March with little signs of any improvement. Even the most doughty cyclist could be forgiven for hanging up his steed and creeping shamefacedly to the public transport option or worse still the car – sacrilege; note to self, confession this week-end! 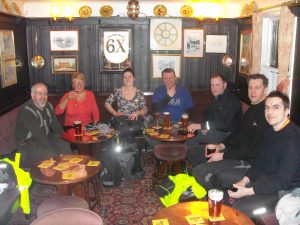 We stood shivering on the concourse of Bromley South Station awaiting the arrival of the latecomers. Spencer had his phone clamped to the side of his head as he discussed some urgent cycling business with a caller. The rest of us stood about discussing who was missing; Linda – lightweight, Sticky – lightweight, Steve W with some ridiculous excuse about being in Leicester – lightweight. We were please to welcome James on his first ride with us. Phone call finished eight of us were led off by ride leader Steve H.

This evening’s route was one of those little gems that I just wish I could find again. Basically it was down the side of the Station through the residential back-streets to Widmore Road which we crossed at the BP petrol Station. Then more side streets to Sundridge Park where there was a bit of a traffic hold up because of road-works – Oh the joy of cycling as we wove our way through the line of stationary cars waiting for temporary traffic lights. From here we turned onto some more quiet roads and then into the parks as we followed a little gem of route which popped us out at Chinbrook Road. How clever was that. There were a couple of width restrictors the likes of which I’ve never seen before. It was almost impossible to get a bike through. Quite what problem the lunatic that installed these was trying to address I can only wonder about, but it seemed very extreme. I shall go back and get photograph in the daylight and post it here in due course.

Dunkery Road led us to and through Chislehurst and we soon found ourselves locking up outside the Ramblers Rest. The landlord came out to enquire about the disturbance as we chained up the bikes and then realising that we were not a bunch of vandals set about making us very welcome.

We settled in the warmth. The three regulars who were at the bar on our arrival disappeared and we had the place to ourselves. Eve decided to show us her beaver which was a bit of a shock. And then surprise surprise we were joined by the long lost Nev Medhurst with his pals. Nev was on sick leave due to a very nasty cycling crash whilst mountain biking. I won’t go into the details but it is good to know that Nev expects to be back in the saddle next week. 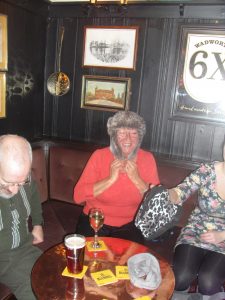 I bailed out at ten o’clock when he abuse about the forthcoming camping trip became intense, and stopped for a doner kebab on the way home so I really was in the dog house indoors stinking the place out.

This was a great wander. Well done Steve H