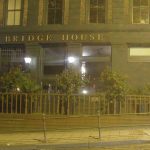 A slight drizzle in the air as I arrived at Bromley South. It didn’t look as though we would have many riders tonight, but they gradually turned up and we were 9 in all when our leader John set off, our destination tonight being The Bridge House Penge.

Eve wasn’t feeling great and had requested no hills, so we headed for Beckenham Place Park. It was a mild evening and the earlier rain has disappeared as we rode along chatting about the events of the past week. As we tried to exit the park we found the first exit we tried was locked and with tall spiked railings we thought better of attempting to climb over.

Going back a little way we soon found exit number two, also locked, but the wire fence was much lower than the other one so we climbed over one by one, lifting our bikes over as we went. All of a sudden there was a cry of ‘stop’. Our newly elected Treasurer Linda had landed astride the fence with her undercarriage caught on the wire. Our leader was a little too quick in my opinion to run to her assistance, but eventually managed to untangle her clothing from the fence and we were on our way again. (I wish I had had a camera).

We then cycled up the alternative route to Catford Bridge and this evening John took us in via the busy route. This gave us the opportunity to see the recently burned out and historic Catford Bridge Tavern. The derelict remains looked very sad under a large scaffolding. Hopefully it will be rebuilt and we can do a wander here one day! Then it was on to the Waterlink Way for a few miles, always a lovely ride, but especially so this evening as there were very few people about. A few groups of youths lurking under the bridge smoking something or the other, but otherwise uneventful. 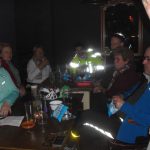 As we came onto the road again we headed towards the one way system and then left in the general direction of Penge. It was at this point that we realised we had lost a rider, so John went back to find he had lost his chain.

Once we were back together we pushed on for the final mile or so to the Bridge House. On arrival they very kindly opened up the back gate so that we could park our bikes securely in the garden and once all safely locked up we moved inside. The drinks selection was good and served quickly and we were generally made to feel welcome. There were a few regulars sitting at various tables, the piped music was playing in the background and perhaps it just a little louder than was justified, but this is a very minor moan about a rather nice pub. If you want to know if this is the March Pub of the Month then you will need to check back.

Here we found Tessa waiting for us and before long were joined by Mark, Terry and Lyn, so 13 in all. A very pleasant evening followed and then the bell rang and we all started packing up and getting ready for the long ride home. (for some of us anyway).