WWW to The Ivy House 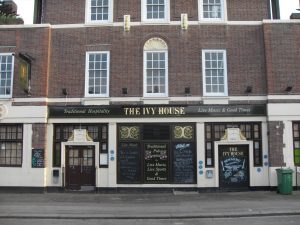 There were 12 of us as we set off from Bromley South, amidst the chaos that abound outside the station.  The ambulance parked outside the station pretty much made sure the traffic ground to a halt towards the A21, while the road works on the other side of the road took care of the rest.   We crossed the road on foot and made our way through one of John’s little cut throughs at the back of Westmoreland Road and headed for Shortlands.

Great I thought, we are heading for the nice flat Beckenham Place Park, WRONG as we ascended Downs HIll, inappropriately named when you are going up it.  I was soon lost but John, who was leading tonights ride, rode confidently on, twisting this way and that as we made our way towards Penge via the back streets.  On to Sydenham and as we went through Brockley Rise I began to recognise some familiar sites.

It was a chilly night but we soon warmed up and before long we finished our 8 mile ride and were locking our bikes up in the back yard of the Ivy House.   This is one of our favourite pubs with some of our members having shares in this community run establishment.

With an early start in the morning Howard decided against the Gama Ray bitter, which by name alone sounded as though it packed a punch and this was confirmed by the bar staff as one of the stronger ales.  We soon settled down in a quiet section of the pub with Tessa collecting up the candles from all of the other tables so that we might get some light and maybe a little heat.

We scored the pub between us and we will have to wait to see if The Ivy wins the ‘Pub of the Month’ for March. A rather jovial evening followed and before we knew it it was 11 o’clock. 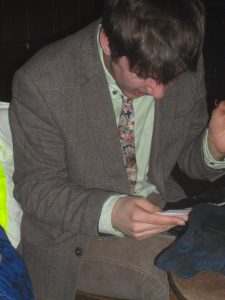 We weren’t particularly looking forward to the ride home, it had turned quite cold and some of us had a fairly long way to go.  We finally gathered outside the pub and set off towards the Waterlink Way, together with a rather nasty freezing cold wind.   As we hit the Waterlink Way and cycled alongside the river the temperature seemed to drop another 10degrees.  A frost was beginning to appear on the grass verges alongside the cycle path.

For the remaining five we set off down Queen Annes Avenue and up to the A21, turning left down Southlands Road to Jubilee Park.   A good evening and many thanks to John for leading the ride and getting us back.  Next week it’s The Railway, West Wickham, hope to see some of you there.