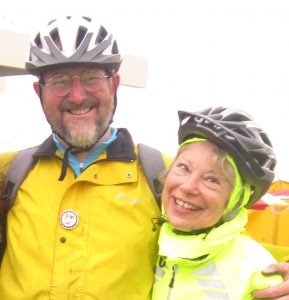 On Sunday, 6th May 2012, I was feeling very chuffed about my achievement. Despite the rain and the cold and being the last to arrive with Adam, I completed the Bigfoot Annual Hayes to Brighton Ride, albeit in 9 ¼ hours! Who would have thought it possible when only the previous July I had struggled to ride even the length of Queensway in Petts Wood.

By July 2011, a rather large birthday had been and gone and I knew that, since I had never experienced learning to ride a bike as a child, that if I didn’t learn to cycle that summer I never would. A bike had been sitting in my garage for the past ten years, but had only seen the light of day on the odd bright sunny day in the summer when it got an airing for about 20 minutes.

I had tried on various occasions walking the bike to the woods and riding on the flat bits. I had even tried riding in an empty car park only to fall off when someone looked as if they were about to come into the car park. I was too anxious to venture far and eventually found riding up and down the same road was becoming a bit tedious!

I decided that there must be a club somewhere that would help beginners. Google to the rescue and Bigfoot appeared. A family ride seemed a good start. How kind everyone was and Adam was especially patient as he encouraged me a bit further as I struggled to either get the bike started or move in an upward direction on what to me seemed like a hill, but was probably just an mild incline! Bromley Cyclists and Spencer’s Saturday afternoon rides pushed me even further. This was after Eve and Nev from Bromley Cyclists spent some time with me and Nev promised to accompany me the following Saturday if I practised an hour every day for the next four days. As I didn’t want them to feel that I had wasted their time, the practise started and the following Saturday, Christmas Tree Farm beckoned. This was just what I had always wanted to do – to be able to cycle along country lanes and enjoy the views, especially in the sunshine.

The cold, wet days of autumn soon appeared and I knew I had to strengthen my legs otherwise I would never keep up with the group rides. One foray to what had been level 1 at Bigfoot had seen people disappear over the horizon within what seemed seconds! I took spin classes instead several times a week in the warm and dry which did great things for my strength and endurance. I was really pleased with the result when Adam started his training rides for the big challenge to ride to Brighton. As usual, people with more experience looked out for others and words of encouragement were exchanged. Despite the fact that riders from 9 to age 71 were all faster than me, we were still a great group and later, down on Brighton sea front, there were cheerful, beaming faces all around. Thank you to everyone who has been so encouraging to me and I look forward to many happy days of cycling yet to come. So I guess, if the motivation is there, practically everything is possible. Just do it!

“all we need to make us really happy is something to be enthusiastic about”. Charles Kingsley (1819-1975).