Today we teamed up with our good friends from Pollards Hill Cyclists. It was actually their ride and we just tagged along. So many thanks to mark for a lovely day out.

Most of us gathered at Bromley South and we then made our way up the usual Riverview way Route to London Bridge. We were in plenty of time so we took it slowly. A couple of folk who had registered sent apologies, so there was just 7 of us.

Mark and the PHC massive were awaiting us, and a goodly crowd it was too. By the time we set off the numbers had swelled to 27.

We were soon in the quiet roads around the Rotherhithe Peninsula  and apart from a short stop for the almost inevitable puncture repair we made good time to the Cutty Sark where we stopped in the cafe attached to the National Maritime Museum for a welcome cuppa and for the greedy ones a slice of flap jack too!! 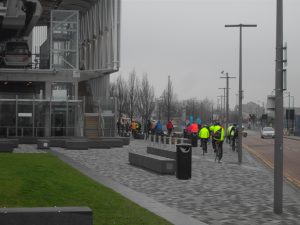 Once refreshed we carried along the Thames side path around the Dome which from this aspect looks very sorry for itself. On reaching the cable car station we split into two groups. Most opted for the cable car crossing. About half a dozen chose to press on to the Woolwich Ferry. We agreed to meet on the Northern Shore within the hour. 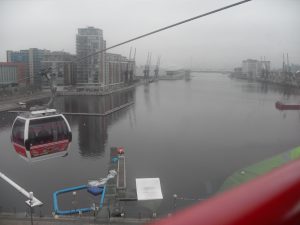 From the cable car

The cable car crossing was fun, the ferry folk also enjoyed their river crossing experience. One regrouped we started back west and at 1 o’clock we stopped at the Fox Public House at the excel Centre for lunch. 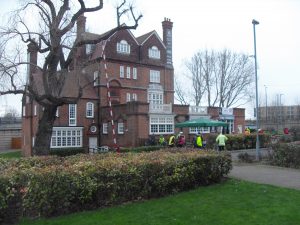 We dallied long in the pub and it was 2.30 pm before we got going again. Some elected to head towards the Woolwich Ferry and make their way back to SE London via the maritime route. Most of us continued eastward and were soon riding along the Greenway  Path. My first experience of this route and what a lovely ride straight to the Olympic Site where Mark led us to The View Tube for more refreshments. And here it was that I have to say I was served the most delicious piece of bread pudding I have had in life. 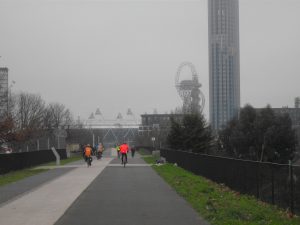 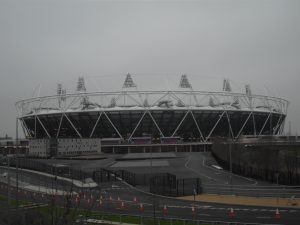 The weather today has not been very kind, it has been very misty, overcast and gloomy so by the time we restarted after the View Tube the light was beginning to fail. Most were going to London Bridge Station to catch a train home. We followed the River Lee towpath with its cobbled sections which makes cycling difficult.  For me the train option when I could have cycled doesn’t quite close a cycle ride properly so when we reached the junction with the Commercial Road I swung South through the Greenwich Foot Tunnel and rode home  down the Riverview Walk. 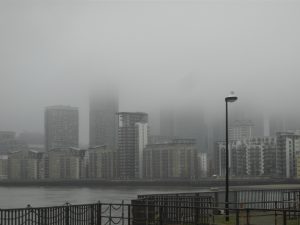 This was a super ride so many thanks to Mark of PHC for organising and leading it. And a big thank you to all the other riders who were such nice company!