See if you can see yourself or your friends

This is a very brief report of Bromley Cyclists’ small contribution to this huge event. I will start by recording our congratulations to Ashok and his team for organising such a vast event on such limited resources. 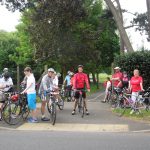 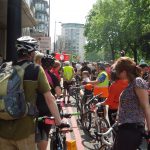 At 0900 we departed Bromley South and made our way to Cator Park for the second rendezvous and set off for London at about 0945. There were 21 of us. At Waterlink Way we met Jane and the Lewisham crowd they were still mustering and waving a cheery ‘Good Luck!’ we pressed on. The remainder of the ride was unremarkable, barring a driver who became a bit impatient with us in Peckham, but this was more of a misunderstanding than an altercation. 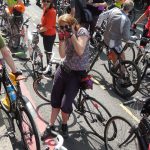 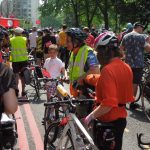 Just as we reached the Strand the police closed it and this sent us on a bit of a detour but we eventually reached Park Lane at about 1130 and we took our places in the mass. As the start time approached more and more cyclists arrived in various costumes and sporting all sorts of banners and placards supporting the campaign. 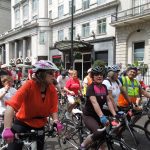 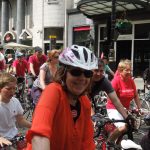 There were some rousing speeches as we waited and then we were off. The ride followed much the same route as last time, but how the weather conditions were different. The skies were bright and the clouds high. 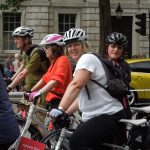 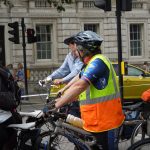 We slowly made our way along the car-free streets via Piccadilly, Lower Regent Street, Trafalgar Sq, Whitehall and the Embankment where there was a rally. As we turned onto Westminster Bridge Rd wonder of wonders coming over the bridge in the opposite direction like some cavalry relieving a siege came the Tweed Bike Ride. There were hundreds of them on their beautiful antique bikes and wearing their immaculate period costumes. We waved and cheered each other – great timing. 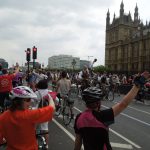 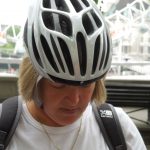 After the rally we dispersed to get some lunch at the little piazza on the south side of the river. Good grub and very reasonably priced! 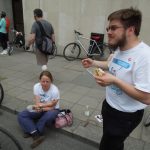 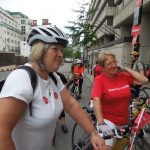 At 1430 we regrouped for the return ride and headed South East. We took a shortish refreshment break at the Ivy House in Nunhead, a pub in which some of our members retain a close interest. 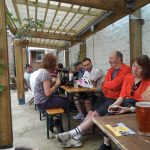 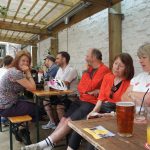 We got back to Bromley South just after 1700.

Tomorrow it’s our Space for Cycling event in the form of the fabulous Tour de Penge. We hope to see you there.