A report from Steve Bunn leading the 12 mph group.

We had 19 people turn up for the 2nd of the Brighton Training rides today. An excellent turn out bearing in mind the somewhat unpredictable weather we are experiencing at the moment. My co-leader Joe and I decided we would do a 50/50 split…….so I took 11 and he took eight!!!!!

My group headed off first leaving the designated route departure point outside the Church at 10:05. Joes group left 10 minutes later.

Was it just me or did we see nearly as many horses as there were cyclists yesterday. Beware when passing these big old units and they can be temperamental and bolt at the slightest change (as we experienced first hand on the road down the side of the Tally Ho Pub). The horse was clearly startled and went berserk until its owner resumed control some 20 seconds later. 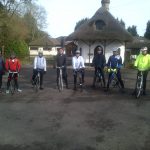 Some of the 12 mph Riders

Also beware another hazard on this type of ride…..the lesser spotted 4 x 4…….a well known frequenter of the English Countryside that is a constant threat to the cycling fraternity and can often been found taking up 90% of the width of the road.

Our altercation on a blind 90 degree bend resulted in one of our group ending up under the front bumper of a Range Rover. To the credit of the driver he did see me as the leader a second or two earlier and had virtually stopped before our intrepid cyclist lost it on the gravel and disappeared underneath. On this occasion there was no damage to rider, bike or car so I think Alex should buy a lottery ticket or two this week.

Riders take note…..we all love a bit of speed but in these conditions we must be doubly aware of the perils of wet, dirty, gritty and potentially icy roads. Caution is the word of the day. And all this after poor old Alex got a puncture at the top of Church Road as well.

Other than that the ride went swimmingly well with no further issues to mention. The group bonded well and kept up a good pace, averaging 12.8 mph according to my little trip type computer thingy.

The next ride is the 8th March where we will investigate the Chelsfield, Lullingstone, Eynsford, Crockenhill loop again. A fine ride with a few interesting climbs (Worlds End Lane springs to mind). Hopefully Adam will sort out the weather for us again.