The Big Day had arrived. The weather was cool and bright there was a slight breeze but nothing serious; in all a fantastic day for a bike ride.

Hayes Lane was awash with cyclists at 7.30 am. Adam had sited himself at Panagua Bikes and was directing proceedings with his usual friendly and efficient patience. 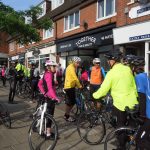 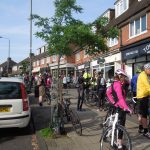 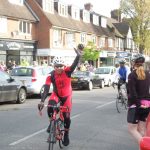 Ride registration was being organised at various other points along the footway by other helpers. Riders were nervously making final checks on bikes and kit; navigators were checking maps and electronic route finders, some riders were eating their carefully prepared lunches, such is the way of things. 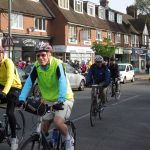 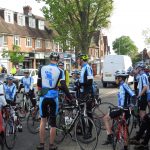 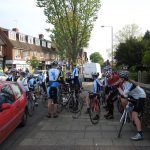 First the Bigfoot Fast riders set off, all looking highly organised and efficient in their smart livery. This cleared some space for the rest of the throng to spread out and organise. Group by group we were called to order and transferred to the start line on the southbound side of the road and with a cheery wave we launched southwards. 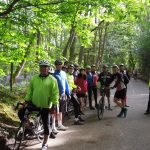 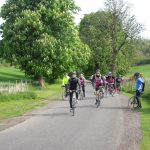 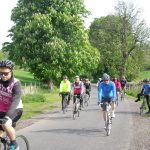 I was in the 10 mph group we were 20 strong at the start (and 20 strong at the finish too, I hasten to add) Shaun was our leader backed up by Phil and Joe. Once on the road we soon settled to a steady pace and began to eat up the miles. We needed no maps at this stage we were on roads we all knew well, had cycled on the training rides and on many other occasions, but you can never afford to be complacent can you? Having passed the White Bear two riders needed to pull over saying they would catch us up. Just around the next bend we turned right into Church Road and pulled over to await our stragglers; and we waited, and we waited. And then the realisation that they must have overshot the turning. Mobile phones came to life. Contact is made they’re on their way back to join us, but by now we have dispatched a search party and he has become detached. We lost about a quarter of an hour sorting this out and were overhauled by Adam and his youth riders who looked particularly smug as they sailed past.

Regrouped and re-ordered, we restarted. Still on roads we knew well. At Woldingham we followed NCN 22 or 23 (I forget which it is) a bridleway into the grounds of Woldingham School. This was a particularly pleasant part of their ride through their beautifully manicured grounds. We rejoined the road just north of Godstone Village where we crossed the sleepless, roaring M25. 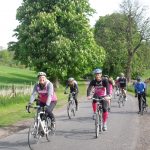 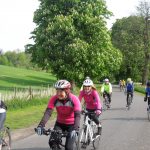 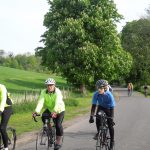 Godstone to Bletchingly is westwards along the A25 – a nasty road on the best of days. At Bletchingly we turned south on to the quieter roads. We could smell the coffee now. Just before the Bell in we encountered a large, well organised cycle race, which made us all feel just a little inadequate – but do they enjoy the scenery? 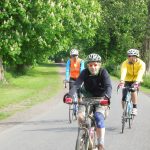 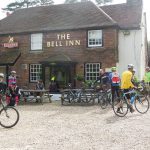 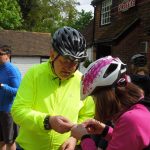 The Bell pub was very welcoming and some of us were able to grab a cup of tea for which the landlady very generously made no charge (the tea drinkers all made a donation into the charity box on the bar). We were refuelled with flapjack and bananas and were able to use the pub lavatories, we chatted to the cycle race marshals who were waiting in the pub car park for their riders to come round on the next lap. We spent about 20 minutes here and as we were preparing to depart Adam (who we had overtaken whilst they fixed a mechanical) rolled in with the youth group just in time to avoid being flattened by the peloton of the cycle race as it hurtled past. I tried to catch it on camera but my pix don’t do any justice to the spectacle.

Shortly after the Bell we had our only map reading wobble of the day when the route on the Garmin seemed to deviate from that on the map. It didn’t take long to sort it out and we were soon rolling again – we followed the Garmin which took us through Copthorne; the two routes rejoined each other at Turners Hill anyway. 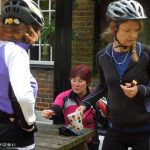 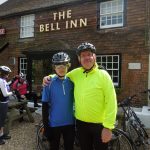 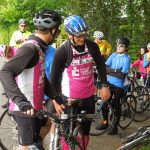 There is a long climb up to Turners Hill but boy is it worth it for the wonderful views looking south towards Wakehurst Place – which is a lovely place to visit at this time of year to see their rhododendrons in bloom. For us cyclists there are also some lovely long downhill stretches – bliss!! 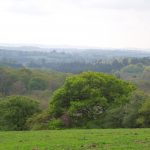 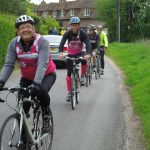 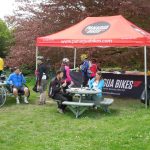 Through Staplefield we arrived at our second feed station; the Victory Inn where we were also able to get ourselves more tea, and other drinks of course. There were sausage rolls, pork pies and energy drinks. Panagua Bikes were doing a Dr Bike. It was bright and sunny and we sat outside chatting. Once again Adam and the youth riders arrived as we departed. About 300 yds on from the Victory Inn we saw our first Sustrans signpost telling us that Brighton was just 17 miles distant. This gave energy to tiring legs and we were soon back in the groove and pedalling strongly. The only thing between us and Brighton was a few miles and the South Downs; that huge lump of geology which sits above the south coast like some massive fortress wall. 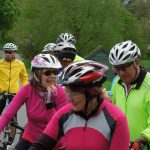 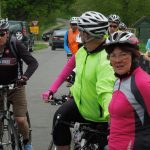 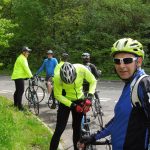 Today our route would take us over the notorious Devils Dyke Road perhaps not quite as bad as its infamous twin – Ditchling Beacon – but still a hideous beast of a hill. But for now it was relatively flat and where there was a gradient in was mainly downwards. It was on this section that two riders who had gone ahead missed a turning and so we had to wait whilst they caught us up, but that gave the rest of us a breather. Here we met the faster riders on their return ride all looking revoltingly fresh – Ah youth, though not all were in the first flush I would have to say!

At High Cross we stopped to take on fluids. By now we could see the downs in the far foreground. The forthcoming climb was beginning to become a reality. One of our ride leaders suggested that anyone reliant on performance enhancing drugs should take them now! I didn’t see any strange powders being taken or syringes being used, but I did note a few people having an extra handful of jelly beans and suchlike. 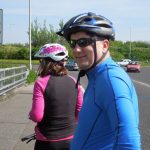 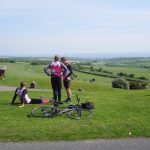 As with many of the mega hills the Devils Dyke has a gentle start which lulls the cyclist into a sense of security and then it gradually turns the screw, and just when you think your last drop of energy is gone, when the lactic acid in our legs is burning at its fiercest, the real ascent begins. Most of us rode up, slowly just ticking off the yards in the lowest gear. And so eventually we crested the brow and there she lay like some glittering oasis – Brighton, City of Sussex that noble town nestling on our southern shore, looking out over a blue tranquil calm that is the English Channel. It was nice at the top and we didn’t hurry to restart. We were glad of the break.

From the top of the Devils Dyke it is just about a 5½ mile freewheel to the seafront. We arrived at the Meeting Point Cafe at 4 o’clock and were met by proud mums, wives, sisters, girlfriends, boyfriends (and pets).

I am afraid at this point my little camera had a major (and I suspect terminal) malfunction – I dropped it – so no pictures of our triumphant entry onto Brighton seafront.

We loitered awhile – more tea, some cake, fish and chips for some. It was very pleasant sitting in the sunshine sheltered from the cold wind.

As we prepared to make a start to the station the youth riders arrived. Now that really is some achievement Chapeaux to you guys.

Finally I will record the sincere thanks of all members of the 10 mph group to Shaun, Phil and Joe – Shaun who lead with great skill, consideration for his riders and faultless navigation; and to Joe and Phil who swept from behind to ensure we all arrived together. Well done guys it was a pleasure to ride with you and with all the other riders of our group.

And a very special thank you to Adam for organising it all, including all our training rides which ensured we were all fit enough to meet the challenge. You sir are a star!