Well finally the day was here.   After weeks of training we were all looking forward to the 54 mile ride to Brighton on a lovely sunny bank holiday Sunday.

Alas this was not to be as we gathered outside Panagua Bikes in Hayes.  Dave had opened up early today especially for us, so we were able to get that extra inner tube just in case, or have any minor bike problems sorted before the start.

The faster groups started setting off around 7.30, with our group not leaving until around an hour later.  14 in our group today, Spencer leading, with Eve and Terry taking it in turns as lantern rouge and then there was Jack, who just buzzes about all day, checking everyone has turned off at the right place and helping at the junctions.

The first bit is just a steady uphill, first to Keston and then on to Nash Lane and Layhams Road.  It was here that we had our first puncture, one of our youngsters, but Dad soon had it sorted and we were underway.   The rain driving down we were now well and truly soaked and with a strong headwind it all seemed a lot harder than usual.   Then a second puncture.  At this point Eve took the group on to The White Bear where it was safer to wait off the road while Mark tried to fix his sons puncture with Spencer.

We stood in the car park trying to imagine that we were on a yacht at sea and the rain was in fact the spray from the ocean.  It worked for a few seconds but I think it was the lack of sunshine that convinced us otherwise.   Then Spencer arrived to tell us that Mark and his son had called it a day as the second inner tube had also deflated.

We set off towards Woldingham School, a beautiful setting but with that strong headwind a much harder ride than usual. 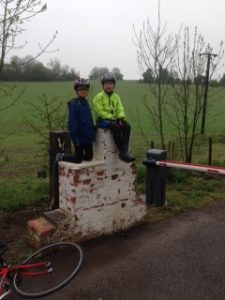 Our youngest riders, Isla, Luca and Oscar were in good spirits and with a constant supply of jelly babies, seemed to get more energy by the minute.  I must say I ate quite a few but it didn’t seem to have to same effect.

By now everyone was looking forward to the first stop at The Bell, just past Bletchingly.  Unfortunately the earlier groups had scoffed most of the food, but we had a banana and filled up our bottles and picked up a few extras from the pub and we were soon on our way again.  Thank you so much to everyone who gave up their day to man the feed stations.

The next part of the journey was much nicer and although more hills, there were some long flatter roads too.  We had several riders who had not ridden more than 35 miles before and a special well done must go to Nicola and Sophia who did amazing well and kept up a good pace and coped with the hills extremely well.

At Stapleford we had our second stop, another pub at which we had lunch.  30 minutes only said Spencer but unfortunately this turned into a longer stop as the food was a bit slow being served.  It didn’t matter that much really and we were soon on our way again.   By now we were looking forward to our final challenge, Devils Dyke.  We could seem the downs in the distance and they looked enormous.

We stopped at the bottom and Spencer explained what we would be doing and not to worry if we had to do a bit of walking and off we went.   The youngest went off like a rocket, not in the least daunted by the prospect of this mighty hill.   Everyone set off at their own pace and we all made it to the top.   I think there had been a veteran car rally somewhere because we had seen a few old vehicles over the past few miles but nothing like the old fire engine with around fifteen firemen hanging on for dear life as it came hurtling down Devils Dyke at top speed.   As it went past me I did at one point wonder if the brakes would work when it got to the bottom.

Before long we had all assembled at the golf club at the top, very well done to everyone but especially to Nicola and Sophia and of course Isla, Luca and Oscar, a splendid effort.

Then all the layers went back on ready for the descent and we certainly needed it.  Downhill all the way to Brighton beah now where Adam was waiting for us.  A very long day as we arrived around 6.45 but an enjoyable one and a very well done to Spencer for leading us all the way.   Then it was on the train back for some of us or car for those who had been picked up and home.