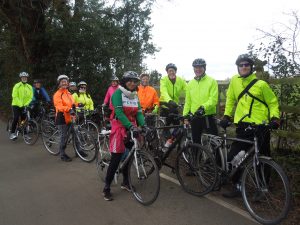 (More pix at foot of page)

Do you know it is sometimes really difficult to write a report and other times there is loads of stuff to write about. This week’s ride was quite uneventful by comparison with some of our other outings. If anything today was the day of the horse, there were lots of horses on the roads today and its jolly nice to see these majestic beasts shooting the breeze with their riders. I tried to ride a horse once: massive thing it was too, I didn’t fall off but that is about as good as it got for me. They are beautiful animals and the folk who can ride them are very skilful – but for me remaining upright on the humble bicycle is a sufficient mobility challenge.

The 10-12 mph riders began to gather on the pavement outside Panagua Bikes at 0915 and by 0930 there was a veritable and enthusiastic throng; babbling and jabbering in excited anticipation of the task ahead. We were a little late getting organised so it was nearer 0945 before we had split into groups. I had 12 riders and Joe A roughly the same. Pretty much the same teams as the last time out on Training Ride 1.

Joe led out his riders, as is customary, while I chatted to my team about the route check which I had completed last Sunday. After the obligatory 2-3 minute wait we too saddled up and nosed our way onto the road only to find Joe and his riders just a little further along also making a start. Joe had not started initially as I had thought but had simply moved his team a bit further up the road to conduct his briefing. Hence it was that we all cycled up West common Road together causing a right old road blockage. Fortunately the roads were quiet and so I don’t think anyone was inconvenienced!!

At Farnborough Common, I let Joe get ahead and then we followed at a respectable distance.

It’s a long uphill climb from Hayes up onto the North Downs so in spite of a really keen biting wind none of us felt the chill and indeed some riders were shedding layers in order to stay comfortable. We made steady progress, as one would expect from such sensible peloton of cyclists. On some days motor traffic in the lanes can be quite intimidating, today was not such a day – thank you drivers!

I can’t remember how far we had travelled when we encountered the first horses and their riders, it was probably around about Downe Village. Anyway this was the first of many such encounters. We were called through and giving them a nice wide berth we passed safely by. At Downe we passed the Queens Head, a pub made famous by Mr Nigel Farage leader of the UK Independence Party. According to this report UKIP are not very pro-cycling, perhaps they would like to take the opportunity to contradict this! This rather neatly brings me on to the recent declaration by the local LibDems that they intend to prioritise cycling in our borough. This is great news which I hope turns up the heat on the other political parties to make similar commitments.

Bromley Cyclists are about to launch the 2016 mayoral election campaign ‘Sign for Cycling’ calling for More Space for Cycling, a mini-Holland in our borough and Safer Lorries. We will be asking you to sign our petition when it launches soon so keep an eye out for an online link here.

It was in Grays Road we had our most testing brush with the horsey fraternity when we caught up with a couple of riders in the quiet narrow lane travelling in the same direction as us. We were called to come through and began to pass when it became clear that the younger of the 2 animals was becoming distinctly agitated. I had passed but the remainder of the ride was behind when the rider asked us to hold back whilst she sought to regain control, which she did! She then suggested that it would best for her to go on ahead to an opening where she knew she could get off the road and let us pass in safety. We held back and pulled over another cyclist who was about to zoom through in ignorant bliss. All seemed to be going well until in the distance from the opposite direction and around a blind bend we could hear the loud roar of motorcycles heading towards us. Just short of the suitable pull-in point two motorcyclists on the noisiest vintage motor-bikes you have ever heard exploded onto the scene followed by a couple of cars. Mayhem!! The young horse was now stuck between us at the rear and two motorcycles to the front. The motorcyclists quickly realised the problem and pulled over but stopping their antique machines was clearly far more involved than if dealing with modern ones, but eventually they succeeded and quiet descended on the scene. Meanwhile the rider skilfully managed to control the skittish horse with considerable dexterity; well done to her. As the scenario calmed so did the horse which was eventually encouraged off the road into a driveway where (s)he seemed far more relaxed. We gathered speed and pressed on through before further chaos ensued; still only around half way around our route. The restarting of the motorcycles was obviously somewhat more involved than on on a modern machine and we left the bikers struggling to get restarted.

The second half of the ride was more downhill than up and we made good time. The turning past the Blacksmiths Arms is like going over the edge of a cliff and after the long ride down into the valley there is inevitable slog up the other side to Christmas Tree Farm; a real lung buster. Riders did really well here and I was most impressed with the commitment and grit.

We re-entered Downe and caught Joe and his riders in the Parlour Tea Rooms. The friendly staff did well to serve us all efficiently and we were soon supping delicious cups of hot tasty tea and eating the mouth-watering cakes. We completely overwhelmed the place and I apologise to some of the other customers who must have thought the Tour de France had invaded their luncheon. One rider who was on a deadline departed from here.

We dallied awhile, tea stops are always a great opportunity for a chat, particularly for ride leaders who always have to have half an eye on the ride whilst on the road. As we were sitting in the café I spotted a couple more horses being ridden past. One in particular caught my eye a huge animal and beautifully groomed, I pointed it out to the others and then thought no more of it. Setting off from the tea shop a while later we soon overhauled the two horses and who was the rider? No-one other than Spencer’s son, James, out on his newly purchased steed. We waved and called hellos but we were on the final run now so didn’t stop.

We arrived at the finish line at 1315 and after saying our good byes set off for our various homes for a warm shower and hopefully for most a relaxing afternoon.

In particular I thank Ann and Joe W who back marked the ride with their usual calm professionalism, but also a thank you to all my riders who were just a dream team to lead. You worked hard, cycled brilliantly well and made my job so easy. I look forward to leading you all again very soon.